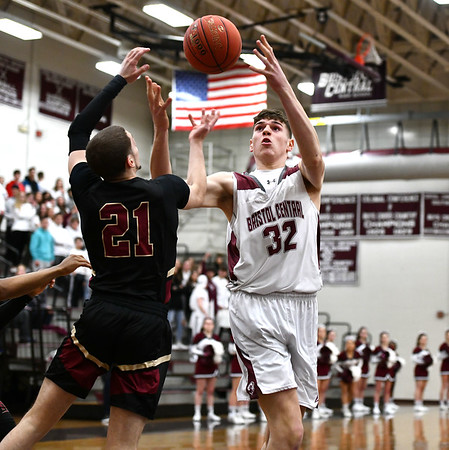 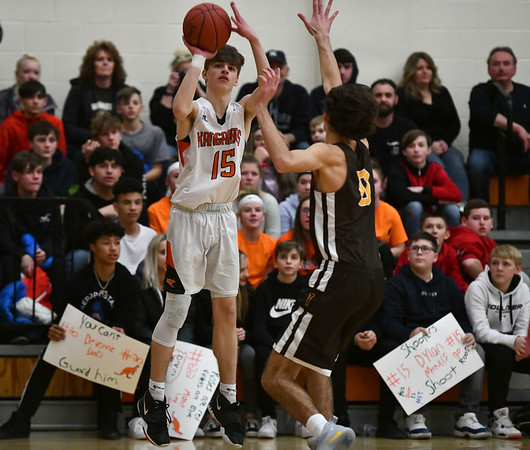 Boys basketball saw a variety of successes in the Bristol area with three teams making deep runs in their conference tournaments and two winning the conference crown to finish their limited seasons. Bristol Central closed out its year not only as champions of the CCC, but as the top ranked team in the state according to the GameTime CT poll.

The Rams lead this year’s all-Bristol Press team with four selections, followed by three for St. Paul, two for Terryville and one for Bristol Eastern. This year’s first team features Bristol Central’s Donovan Clingan and Sean Wininger, Bristol Eastern’s Elijah Parent, St. Paul’s Will Barton and Terryvilles’ Dylan Matulis. The second team is made up of Damion Glasper and Carson Rivoira of Bristol Central, Tom Lorenzetti and Jamie Leggett of St. Paul and Dominick Dao of Terryville.

Widely regarded as the best basketball player in Connecticut, Clingan led the Rams to a 15-0 season and anchored his team through games against three top-five teams to win the Central Connecticut Conference tournament. Averaging 27.3 points, 17.2 rebounds, 5.8 blocks, 3.1 assists and 1.2 steals per game this year was enough to earn him Gatorade Player of the Year for the state of Connecticut. He was one o f three finalists for the national player of the year award.

Clingan also earned MaxPreps player of the year in Connecticut for the second year in a row as well as all-state and all-conference honors for the third straight season.

With one more year of high school, he is focused on taking his team to a state championship next year after not having a state tournament to play in this year.

“Donovan can break all major records here at Bristol Central next year as a senior and have his name right next to his mother's, Stacy Porini, which has been his goal since entering high school,” BC head coach Tim Barrette said.

Wininger provided a consistent second scoring and rebounding option for Central, showing the versatility to succeed from any area on the court. A two-time all-CCC selection, he was a double-double threat in every game he played a crucial part of the team’s success.

“Sean is as steady as they come,” Barrette said. “[He] averages nearly a double-double every night out [and] has started over 60 games here at Bristol Central. [A] fantastic leader and the definition of what you want a captain to be.”

Parent will leave Eastern this year with his name firmly in the record books for his shooting prowess. The school leader in career three-pointers and three-pointers in a season made the most of his time on the court to break the school record despite a late-season quarantine. He will be moving on to play basketball for the United States Coast Guard Academy next year.

“Elijah has done a tremendous job for us over his four years,” Eastern coach Bunty Ray said. “He has put a lot of time into basketball and it has obviously paid off. His passion for the game will be missed, and I am hopeful that he can continue his development on and off the court when he plays at the Coast Guard Academy next year. We had to handle a lot of adversity in his four years and he always was ready to accept the challenges in front of him.”

Barton’s season captaining the Falcons squad earned him all-state and all-NVL recognition as he led the team to the semifinals of the NVL Tournament. He posted 11 double-doubles in 14 games this season, taking advantage of his height and diverse scoring skills. He will be playing basketball at Worcester Polytechnic Institute next year.

“[Barton] finished off a very successful high school career with a fairy-tale-like senior season,” St. Paul coach Steve Phelps said. “… Will has left a lasting impression on the underclassmen in our program for them to emulate to accomplish individual and team goals. Genuinely, a privilege to have been in his company and coached for four years.”

Matulis was Terryville’s leading scorer for the final two seasons of his high school career and was integral for the Kangaroos’ recent success. He led Terryville to a Berkshire League championship this year and notched a 19-point, 12-rebound double-double in the final game against with Shepaug Valley.

“Dylan was an all-star and a senior leader,” Terryville coach Mark Fowler said. “Every big game that we had he brought his A-game and that’s what true stars do.”

The second team starts with Dao, a reliable and effective floor general for the Kangaroos. He led Terryville in scoring in their conference championship game with 24 points and 10 rebounds.

“Day in and day out you could rely on Dom. He was our point guard, he was one of our best rebounders, best defenders and really the ultimate team player,” Fowler said. “He’d sacrifice scoring for the better of the team, … he did what the team needed.”

Central was completed by a pair of players who made noticeable impacts without looking to score often in Glasper and Rivoira. Always looking to pass, Glasper directed the flow of the Rams offense as the team’s point guard. He consistently handled pressure well and never let defenses overwhelm him during big moments when he faced double teams. He will be a vital part of the team’s success next year.

“We got to see Damion's talent surface this season,” Barrette said. “Damion puts in a ton of work in the off-season and if you are ever looking for him, you will find him in the gym. Damion did a great job handling the ball this season and defeating the different presses that were put on us during the season. Damion has come a long way in the program mentally, maturity wise, and can’t wait to see him continue to grow.”

Rivoira’s primary job in every game was defending the opposing team’s best player and he came prepared for all 15 games, ready to take on every challenge. This role was heightened when the CCC Tournament arrived and he was tasked with guarding some of the most formidable scorers in the state. He held Northwest Catholic guard Matt Curtis to 16 points in the CCC semifinals, including a scoreless fourth quarter to help the Rams reach the conference final.

“I use the word glue guy as the difference in championship teams, and he is our glue guy,” Barrette said. “Always willing to do what is best for the team, not worrying about himself. Statistics often lie and don’t recognize how important certain players are to a team, that is Carson Rivoira to our team. I can't be happier that he is earning this recognition from the Bristol Press, because without Carson's efforts on the defensive end and on the glass, we would not have come even close to accomplishing what we did.”

Lorenzetti and Leggett established a strong chemistry in the Falcons’ backcourt with either leading the offense. Lorenzetti puts his high basketball IQ on display every moment he is on the court, making good decisions and facilitating scoring plays. His hard-nosed style and outside shooting touch made him an important piece as a senior captain for St. Paul. He will be playing Rivier University in Nashua, New Hampshire.

“The best on-ball defender around, [he] played with an intensity rivaled by none,” Phelps said. “… Tommy gave all he had, every night, game or practice. A tremendous role model and an example set that will be very difficult for others to attain.”

Leggett made an instant impact entering the Falcons’ starting lineup this year as a sophomore. A skilled ball-handler and smart player, he and Lorenzetti kept the ball on string sharing the backcourt. He earned all-conference honors to finish this basketball season.

“Jamie just fit this team’s lineup like a glove,” Phelps said. “Selfish to a fault at times, a high basketball IQ guy who comes from a great pedigree. …. His out-of-season commitment is a testament to the success he experienced this past season. [He’s] not one to shy away from the moment.”