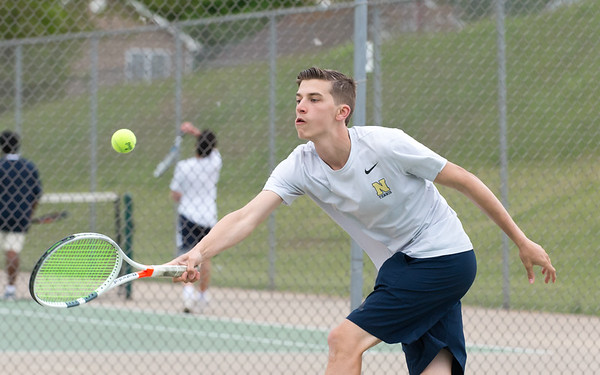 Battling a weather delay, the Rams earned wins from Beckett Hennessey in singles, Awsaf Hasheem and Luis Cruz-Perez in doubles and Adam Mehdi and Seth Sam-Brew in doubles.

A 30-minute delay put the match up in the air, but was able to be finished. Hasheem and Cruz-Perez’s doubles match was the decider for the final, which saw BC’s pair come back from a first-set loss and a 4-5 deficit in the second set. A tie-breaker had the pair trailing in the third set but they battled back to win 11-9.

“It was great to finally get a win under the belt this season,” said BC boys tennis coach Jeremy Sloate. “These guys have been working hard all season and haven't had anything to show for it. With a young team (no seniors) and a tough schedule this year, every match has been a challenge. I am so happy these guys can now see they are improving and they are moving in the right direction.”

Cruising to a two-game win was Isaiah Meeks over Matt Mitchell, rounding out a dominant singles day.

Winning the medal for the evening was Matt Downes, who shot a 37. Brandon Fry shot a 47, Chris Millerick shot a 52 and Dan Gaffney scored a 59. All played for St. Paul.

Watertown was led by Eric Forte’s 41 and Mason Lacapra’s 42.

Godwin’s Nate Berube led his team in scoring with a 57. Cheserea Lia was the medalist of the evening for O’Brien, shooting a 53.

For Goodwin, Isaiah Martel shot a 64, Janelle Roberts scored a 68 and Jaylese Harris shot a 69.

Leading in scoring, earning a medal, was Brianna Pelchar with a 44 for Lewis Mills. Teammate Danna Rubbo was one stroke behind her with a 45 for the next-best score in the meet.

Tori Tolisano had the best score for Newington, shooting a 49. Mia Theriault shot a 51, Chantelle Alvizo shot a 52 and Glorianne Pinote scored a 53. Rounding out Newington’s scoring five was Raechel Bouchard, who shot a 58.

A total of seven hits were made in the contest with the game-winner coming off the bat of Leandro Guzman.

Jomar Rodriguez pitched 8 1/3 innings, allowing three hits while striking out five. He had no walks.

Jack McManus went 2-for-2 with two homers and three RBIs.

Ben Schulz finished the day 3-for-4, driving in a run with two runs scored.

Gavin Gray was on the winning end, pitching his way to a winning decision with 5 1/3 innings of work. He allowed two hits while striking out six.

Simsbury scored the first run of the game, striking first with a run in the top of the second. Newington answered back with three in the third and three in the fourth innings to roll on for the win.

Shaun Callahan was 2-for-3 with a double and two RBIs. JT Gallinoto also doubled, driving in one.

A three-run second inning, which was caused by a three-run homer by freshman Sean Kobialka, and a two-run second inning gave Goodwin a 5-0 lead before Abbott scored its first in the third. Goodwin tacked on one run in the fourth and fifth innings, which added insurance for starter Mike Lukaszewski in a complete game effort.

Lukaszewski struck out eight in the win and doubled. Andrew Koscho and Jesse Defonse also chipped in doubles.

Kobialka finished 3-for-4 with the 3-run bomb.

Jaelyn Gonzalez finished 2-for-2 with a double while Jaidyn Tucker chipped in another base hit in the loss.

A three-run top of the ninth had Eastern feeling good going into the bottom half, but a three-run inning by South Windsor kept the extra innings going. A lone run in the bottom half of the 10th walked it off.

South Windsor trailed by four entering the bottom of the seventh, and rallied to even the score to force extras.

Ali Tellier and Alex Shorette hit homers in the loss. Tellier was handed the losing decision in the circle.

Lily Hansen and Ella Ward each added goals in the win. Alyah Rodriguez-Warren stopped 13 shots, three coming in the final five minutes to hang on for a win.

Six errors from Terryville and 11 hits helped Shepaug get ahead, and a six-run second inning had it holding a lead for much of the game.

Lacy Lyons had three hits and three walks for Terryville.

After claiming the first set, 25-20, the scores reversed during the second set to tie the match. New Britain settled down after that, winning sets three and four with identical 25-22 scores.

Anthony Olmeda had 12 kills and 18 digs to lead the Hurricanes while Niko Schand had 15 kills and three blocks, Arthur Sanchez secured 17 assists, nine digs and eight service points and Lexus Sanchez finished 20-for-21 from he service line with 13 service points.