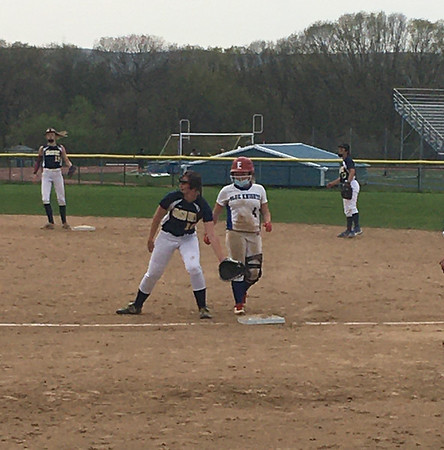 Nikki Greco (right, in white) walks back to the first base bag in between pitches Wednesday night for Southington. | Ryan Ames | Staff Buy this photo

Rodriguez started the game and lasted five innings, before Heidel came in and closed it down.

New Britain was led by Leandro Guzman, who hit a bases-clearing double for three RBIs, while Ryan Lipinski led with three hits. Yan Hernandez was next with two RBIs on two hits with Willis Estronza also securing two hits.

The Hurricanes concluded with 10 hits in the game.

Christian Heidel, Alex’s brother, took the loss on the mound for the Gladiators.

New Britain will host Wethersfield on Thursday at Beehive Field at 3:45 p.m.

BERLIN – James Ellis’ seven innings of work helped hold Bristol Central and Berlin baseball close, but it was Berlin coming out on top in a 1-0 final Wednesday night.

The go-ahead and eventual game-winning run came off the legs of Nick Spinalli, who led off the bottom of the fifth with a single. After getting sacrificed over to second base, Ben Schultz drove him in with an RBI double. Ellis struck out five en route to the win.

Bristol Central had only two hits, coming off the bats of Jacoby Banks and Ryan Ring. Both were infield singles.

The Blue Knights had multiple hits from Jack McManus, Jake DelleVecchia, Devin Pelletier and Justin Chiulli. McManus finished the night 4-for-5 with a double and homer, driving in two runs while scoring twice himself. Pelletier scored twice as well, walking once in a 2-for-4 day. Chiulli ended the night 2-for-3 with a double, a run scored and an RBI.

DANBURY – Abbot Tech softball put two across in the ninth inning Wednesday to get the tying and go-ahead runs in extras, locking up a 6-5 win.

Kayli Taveras’ single on a 1-1 count scored one to break the tie, walking it off.

Trailing by four through two innings, the lady gladiators rallied back with three in the fourth inning. An added run in the seventh evened up the score at 4-4, resulting in extras.

A six-run third inning, a four-run fourth and a three-run fifth helped shoot St. Paul ahead with plenty of insurance. Kennedy racked up two hits to the Falcons’ 12.

Caleigh McDougall had three hits while doubling up on duty in the circle. She walked none, striking out 18. Catie Wootton also had three hits.

Gillian Smith and Neesha Ramschandani had two hits each. Homering for St. Paul was Taylor Lorenzetti.

Ali Tellier struck out 13 as the Lancers improve to 3-2 on the season with a blowout of Middletown. Janessa Gonzalez hit two doubles as part of Eastern’s 11 hits as Jazmyn Browne and Ashley Serafin posted extra base hits.

The Lancers will look to win their third straight game Friday when they face Maloney on the road.

The win improves Newington to 8-1, giving it an automatic bid for the Class M state tournament in June. Hall falls to 3-4.

The Hurricanes are suffered their fourth straight loss to start the season, falling to Rockville in straight sets 25-22, 25-18 25-17.

Niko Schand led the New Britain offense with six kills while Jose Anthony Almeda posted five and Lexus Sanchez finished the contest with four kills and a block. Sophomore setter Arthur Sanchez notched 11 assists in the match and was 10 for 11 on the service line.

“It was a great performance by a very young second year program as they all learn and improve together,” head coach Michelle Abraham said. “Despite the loss I am extremely pleased with the team’s progress.”

The Hurricanes will return to action Monday against South Windsor.

Berlin’s sophomore duo of Libby Dun and Kenna Roman were co-medalists as the leading scorers, both shooting a 41.

The win improves Berlin to 4-0. Wethersfield goes to 2-2.

Newington had a 45 from Madison Massaro and a 50 from freshman Gloranne Tinot.

Plainville’s Julia Smith shot the low of the day, earning a medal with a 39. East Catholic’s Ashley Maningas’ 51 was behind her, along with teammates Katie Batman and Kendra Obrycki (both 54) and Olivia Agnelli (55).

Caitlin Charest shot a 61 for Plainville and Theresa Lopez scored a 76.

Sharing the medal was New Britain’s Xavier Goode and Newington’s Evan Oliver. Both shot a 43.

Teammates Chris Millerick shot a 42 while Brandon Frye and Ben Shea shot a 48.