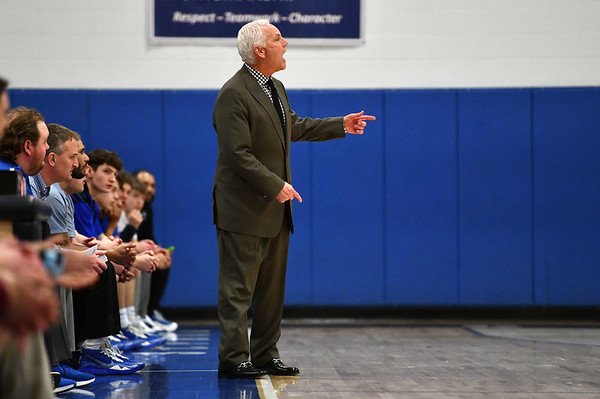 When winter coaches wake up on Tuesday morning, it will be their first day of in-person practices with their team in 316 days.

Tuesday marks the beginning of the new-look winter season, which starts with full team practices until regular season games get underway on Feb. 8. The wait was indeed a long one, as winter sports were the first impacted by the coronavirus pandemic when state tournament play was shut down last March, nearly a year ago.

But for the sports that have been given approval by the Connecticut Interscholastic Athletic Conference and the Department of Public Health to begin their seasons, Tuesday will be an eventful day.

“I’m certainly excited for the opportunity that it offers for our kids,” St. Paul boys basketball head coach Steve Phelps said. “That’s why we do this. It was a sense of excitement for them.”

It’s also an exciting day for the coaches, particularly for those waiting to begin their coaching tenure. On the ice, Rocky Hill/Plainville/Middletown/Haddam-Killingworth head coach David Dubos will officially begin his first season as the co-op’s head coach, and Tuesday’s start means the team will get to play its inaugural season, as the group is in its first year together after Wethersfield left the co-op to play as its own team after last season.

“I’m extremely excited and pumped up,” Dubos said. “I’ve been doing virtual workouts with the kids and trying to build an inaugural season for our program. The kids have been itching to play and just to be able to get on the ice is exciting. It’ll be our first time stepping on the ice together as a team. Hopefully all goes well moving forward.”

The return to play does come with the reality of a limited postseason, as state tournaments won’t be held in March, instead giving way to league tournaments. It will be the second straight year winter student-athletes won’t be able to compete for a state title, but given the circumstances, coaches and players are thrilled with whatever opportunity being offered to them, especially when considering other winter sports that aren’t able to play at all this season.

“It caught me by surprise I guess because most of the conversations I had heard leading up to the meeting was that they would try to retain some semblance of a state tournament,” Phelps said. “So hearing that there wouldn’t be any kind was a surprise, but not a shock. None of us are shocked by anything that happens in our lives since March. But there’s no sense of anger or frustration. Everyone is trying to do the best they can with what they have.

“I understand the CIAC’s reasoning that without a state tournament, it would allow the kids more flexibility to play if their season is interrupted during the course of the season. That’s some sound reasoning, that’s for sure.”

After talking with his players, Dubos received a similar sentiment from his players, who just want to get back on the ice and compete at a high school level for the first time in 11 months.

“I think with everything we’ve been through the last year, you become grateful for what you have,” Dubos said. “Talking with our kids, I’m really impressed with their maturity and their perspective, and they’re just grateful for what they have. We’re excited just to get out there and get something from this winter season.”

Given the time frame, the scheduled 12-game regular season is more than enough for Dubos’ group, especially given the added challenges for co-ops and ice hockey teams as a whole, which need available rinks to host their games.

“Hockey coaches, we do our own scheduling, which is different from most other sports,” Dubos said. “It’s tricky just to fit 12 games within the timeframe that we got. As much as we’d love to play more, I don’t know how we’d fit in more than what we got. I can’t imagine us pulling off any more than 12.”

The basketball season will have 12 games as well, just over half the typical amount in a normal 20-game season. The postseason won’t be limited to two games like it was in the fall, giving players some sense of a normal season in terms of workload.

“The upperclassmen and the kids returning were pretty ecstatic about the opportunity,” Phelps said. “For them, you feel good. There’s also an excitement on our part as coaches to be able to be with these kids again, that’s for sure.”

The one major reminder that this won’t be a normal season will be the masks that need to be worn at all times by players, coaches and officials.

It was a precaution put in place during the girls volleyball season in the fall, but hockey and basketball will likely be more of a challenge given the increased movement of the sports. But when the alternative is not playing at all, it is a miniscule price to pay.

Whatever the requirements, whatever the circumstances, players and coaches are just thrilled to be back after a long and painful layoff.

“We really spent a lot of time utilizing the time off the ice to set a foundation and create a sense of values, and I think adjusting and overcoming are key,” Dubos said. “I think we’re willing to do whatever we need to do in order to get on the ice and play the game. The majority of our team was playing together in a fall league, and at the end, they were required to wear masks. It wasn’t a big deal to anybody, and there weren’t even any breaks then. I think they’re gonna be fine.”