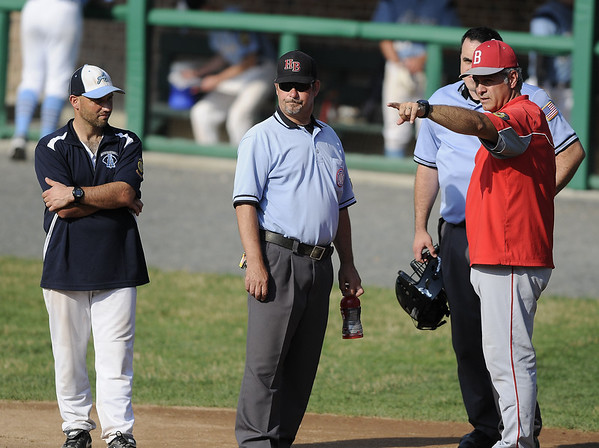 The Bristol American Legion team, now part of the new CT Elite Baseball Association, welcomed baseball back to Connecticut on Sunday when it began its abbreviated season with a double header against West Hartford at Hall High School.

For all members of the team, it marked the first competitive baseball since high school sports were shut down back in March. There were plenty of glaring differences between a normal legion season, like the absence of American Legion sponsorship, but it was still baseball, and a welcomed sight for Bristol and head coach Jerry LaPenta.

“The kids really enjoyed it,” LaPenta said. “We had them all spread out and social distanced. We couldn't use the dugouts at the field we were at, so we had to all bring chairs. That felt a little strange, but the game itself felt normal.”

Having the team spread out in chairs was far from the only change that the coronavirus outbreak has brought to the CTEBA. Players can no longer share bats, there are no handshakes after the game and for Lapenta, the most glaring difference is the vacant spot behind home plate.

“The weirdest part was the umpires, because they're not behind home plate,” LaPenta said. “Some of the calls they had to make with the angles were a little different, but once the game got going everything felt normal.”

LaPenta saw almost immediately how the change in the home plate umpire’s position could impact the game, though it’s a small price to pay for bringing baseball back to Bristol.

“There's no ump down the third base line, so the fair and foul calls down the left field line is tough,” LaPenta said. “There was one that went right over the third base bag for the other team that was definitely fair, but he called it foul, and there was just no way he could have seen that.”

It will likely take time for umpires to adjust to fair and foul calls from behind the pitcher’s mound, as well as balls and strikes. But the players will have to take time to adjust as well, particularly in the batter’s box. Hitters, having not seen live pitching since before the shutdown, looked a bit rusty at the plate on Sunday, as both teams combined to score just nine runs over the two games, splitting the double header in a 3-2 loss and a 3-1 win for Bristol.

“For the first time out, the pitching was strong for both teams and the fielding was decent,” LaPenta said. “There wasn't a ton of hitting for both teams, because kids haven't hit live pitching in three months. Getting their timing back, especially using wood when it's a little harder than aluminum. But they were good and competitive games and everybody enjoyed it.”

Fortunately for Bristol and the rest of the area teams in the CTEBA, there will be plenty of chances to sharpen up their eye at the plate in the coming weeks, as the unique season continues on.

“Two weeks from now, hitting will be much improved because we're playing so often,” LaPenta said. “We play Tuesday, Wednesday Thursday, and then Monday, Wednesday, Thursday, and a double header Sunday. That's a lot of games in a short amount of time.”