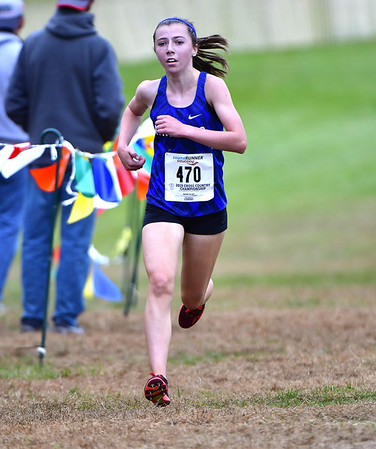 When it comes to the top girls cross country runners in area history, you donâ€™t have to dive too deep into the archives to find the cream of the crop.

Many of the most accomplished runners the local area has ever seen have yet to graduate, and can still continue to build upon impressive resumes before their high school careers are over. In concluding with our long-running series of the top area athletes of all time, these distance runners held claims as some of the best in the state, and some still do.

Lindberg made her mark at the high school level with an All-State selection in 1997, but she didnâ€™t stop there. Lindberg went on to compete at Central Connecticut State University, where she came in sixth place at the Northeast Conference Championships in 1998 to help the Blue Devils win the conference title, then came in ninth the following year to earn another all-conference nod and help CCSU clinch back-to-back conference titles.

Bowser wasted little time in making her name known as a top cross country runner, coming in ninth place overall as a sophomore at the Class LL state championships in 2002. Her performance secured an All-State nod, and she impressed again the following year with an 11th-place finish at the state championships.

Moskey was part of a strong Redcoats team that finished fifth in the Class MM state championships during her senior season. Moskey was All-State as a junior with an eighth-place finish, when Berlin also picked up a top 10 finish at the state level, coming in ninth place overall.

Moskey was finished second on the Redcoats in the state championships as a junior and a senior, and the top finisher for Berlin both of those years was Dimitruk, who came in third overall at the 2004 Class MM state championships to earn an All-State honor.

Sullivan earned a spot on the All-State team with a fifth-place finish at the state championships as a junior in 2001, but her best was yet to come, as she capped off her career with the Rams with a first-place finish in the Class L state championships in 2002 with a time of 15:58. She also led Central to a 14-0 season as a sophomore, cementing her claim as one of the best distance runners the Rams have ever seen.

One of the most accomplished runners in area history, Cancellieri went out with a bang as a senior, taking eighth place at the 2019 Class M state championships to secure her remarkable third straight All-State selection. This came shortly after she secured her first individual conference championship, and logged a time of 20:47 at the State Open after coming in the top 50 the year before. Cancellierâ€™s three straight All-State nods made her the first runner in Berlin history to achieve such an honor.

Bielecki closed out her high school career in style last year, coming in 11th place at the Class S state championships with a time of 21:06 to leave the Falcons as an All-State runner. She was named to the NVLâ€™s All-Iron division team for the second straight season, and will continue her running career at Springfield College.

Michaudâ€™s career with the Blue Knights isnâ€™t even over yet, but she belongs on this list. As a junior this past season, Michaud was named All-State after coming in 10th in the Class LL state championships, logging a time of 19:45. She also came in 25th at the State Open and 56th at the Footlocker Northeast Regional 5k Championship Race in 2019.

How about an underclassman cracking this list? Well, when you have the resume of Michaudâ€™s teammate Izzo, it warrants a spot. Early in her sophomore season last year, Izzo helped the Blue Knights win a tri-meet over Avon and Conard by breaking the course record at Camp Sloper by more than 30 seconds, then continued that dominance with a fourth-place finish at the state championships with a time of 19:22, 22nd-place result at the State Open, and logged a time of 19:03 at the New England Championships, the top mark in program history.

Another underclassman makes our list, and for good reason. Deforest just missed earning All-State as a freshman, but secured a third-place finish at the Berkshire League Championship as a sophomore, and followed that up with an seventh-place finish at the Class S state championships thanks to an impressive time of 20:36, capturing that All-State honor she was so close to having as a freshman. If she continues on this path, there will likely be a number of other All-State nods in the future.