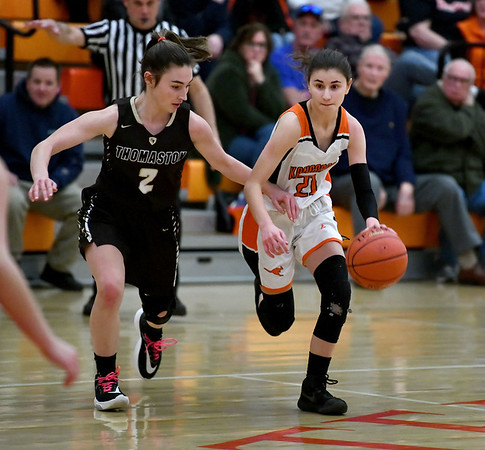 TERRYVILLE - The Terryville girls basketball team is still in search of its third win this season with just two games to go.

The Kangaroos fell to Thomaston 56-31 in its second-to-last home game of the year for their eighth straight loss.

Their offense was held to fewer than 10 points in each quarter and struggled to create scoring opportunities throughout the game.

“If you look at this game, it doesn’t look like a close game, but compared to the last time we played them this was 50 percent better,” Terryville head coach Tom Morgan said. “They weren’t scared this time. The kids were shaking because they were so scared of Thomaston the first time.”

The Kangaroos’ offense saw little success in the first quarter as they were limited to six points.

Taylor Barnett opened the scoring with a pull-up jump shot and Amy Roqi added a pair of free throws before Thomaston scored 10 unanswered points to build its lead.

Zoe Zappone added Terryville’s third score of the quarter with a right-handed floater.

Terryville was forced into turnovers on most of its first quarter possessions, as Emma Kahn’s eight points led the Bears to a 16-6 lead.

The Kangaroos ended up down by 19 points at halftime.

Barnett and Zappone each added four more points in the quarter, but they continued to struggle moving the ball fluidly on offense.

Kahn drilled her second three-pointer of the contest and increased her scoring total to 13. Elyse Krasnowski joined in on the long-range scoring with a triple of her own.

The Kangaroos played their best at the beginning of the third quarter. They scored five quick points off of a 3-pointer from Roqi and layup from Zappone and held the Bears scoreless for the first three minutes of the frame.

“We talked at halftime about half court trap and how to beat it,” Morgan said. “We tried not to dribble right into the trap and pass around it.”

The success did not last, as Terryville was outscored 18-4 for the rest of the period and trailed by 28 with one quarter to play.

Alice Benson added two points with her first bucket of the game with a mid-range jumpshot from the wing.

Facing Thomaston’s backups, Terryville’s defense held the Bears to only four points in the final quarter and outscored them 8-4.

McKenzie Garceau made the most of her late playing time and scored four points, including a reverse layup, crossing under the basket from left to right.

A third win will probably make the difference between playing in the Class S state tournament or not for Terryville.

The Kangaroos’ next game will be its final home game of the year and probably their best chance for that third win, as they host Litchfield on Tuesday. Terryville lost by a narrow 48-44 margin at Litchfield a month ago.