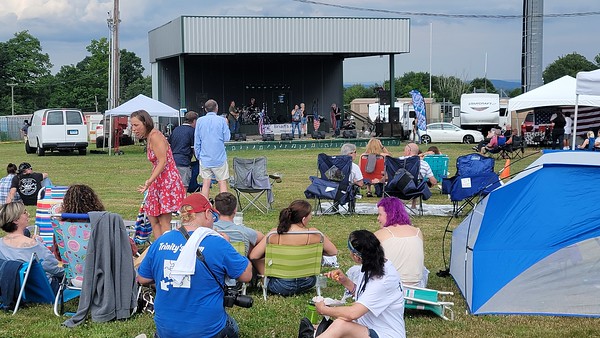 PLYMOUTH – For Demetrius Hernandez, Farm Fest II was a place where he could be like anyone else, there to enjoy the sounds of rock and roll and festival food.

Hernandez has lived in Bristol since March and when circumstances were becoming more challenging in his life, he was connected with Brian’s Angels and became a client of the homeless outreach center.

“Since then, it’s been a place for me to shower when I was in the woods and to eat and let go,” he said. “It was a place for any kind of help.”

Volunteering at the Saturday festival taking place at the Terryville Fairgrounds, Hernandez said he felt it was “amazing” to see festival goers turn out to support the event, which in turn supported the activities of the Bristol outreach center, headquartered at Prospect United Methodist Church.

“I appreciate being out here and getting to see everyone and the people in different circles,” he said. “Homelessness has no face. It can affect anyone of any age and background.”

He lauded the work of Pat Stebbins, Brian’s Angels founder, working to make the lives of others better.

“Today is as good as it gets,” said Smith. “The worst thing when you’re a promoter for an event like this with all that’s going on is bad weather. It’s perfect. We’ve got five great bands who donated their time and we got a great PA and a lot of vendors and volunteers. We lucked out.”

Bands Country Steel, The Remnants Family Band, Jeff Summa and the Roaster, Blondie and Beyond, and the Katrina & Mark Duet all lent their talents to the cause.

LB4 guitar player and Bristol resident Larry Beaudoin said this was his second year playing at the benefit concert.

“You can’t say enough to people in general. You wrap something like this in fun, like we’re doing today, it makes it a lot easier for people to come out with giving hearts,” he said. “It’s about caring and serving others. We’re having fun today but there’s a bigger thing going on and that means more than anything when you really cut through everything.”

Stebbins said she was originally introduced to the festival organizers through her friend, Ray Dunnett. Those organizers then wanted to create a benefit for the homeless outreach.

“It’s wonderful,” said Stebbins of the event. “We were a wonderful accident that happened in Bristol. We provide clothes and food, whatever we got to do to get someone the next step out of homelessness.”

Stebbins noted with the end of emergency eviction protections in the state, Brian’s Angels was seeing more clients at its steps in need.

Stebbins noted the outreach has run out of food at times to feed clients so benefits like Farm Fest are critical for its operation.