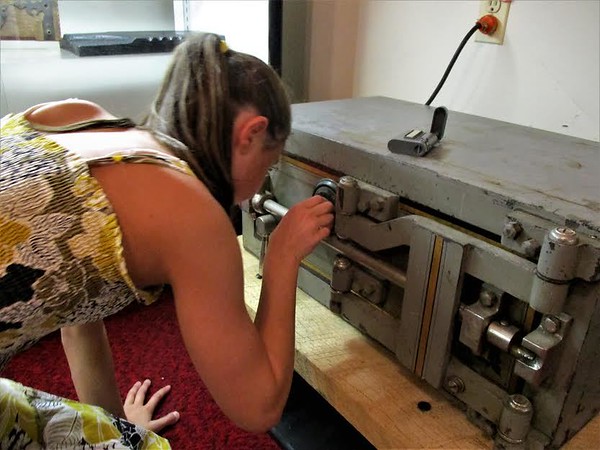 "Looking for Clues in the Lock Museum Adventure". -Photo submitted by The Lock Museum of America Buy this photo
Published on Monday, 24 May 2021 12:18
Written by BRIAN M. JOHNSON

PLYMOUTH – After being closed since last spring, the Lock Museum of America is preparing to reopen for the season this weekend, once again letting vaccinated visitors participate in their “escape room.”

The museum at 230 Main Street features a large collection of antique locks, keys, handcuffs and safes as well as informational displays about the Eagle Lock Company, founded by Eli Terry Jr. The museum’s collection draws visitors from throughout the world according to Jerry Milne, museum spokesperson.

“There are only two museums like this in the world; the other being in South Korea and specializing in Asian locks,” Milne said. “This museum reflects the manufacturing heritage of Connecticut and our town. For many years, Connecticut was the lock-making capital of the world. If you’re from Terryville, there’s a good chance that your grandparents worked at Eli Terry Jr’s lock factory, Eagle Lock Company, which was powered by the water wheel.”

The museum will also offer a free open house on June 12 from noon to 4 p.m. as part of “Connecticut Open House Day. Tours will be provided throughout the day.

In addition to the manufacturing history contained within the Lock Museum of America, the museum has also attracted visitors in recent years with the addition of an “escape room” type challenge called “Finding the Pharaoh’s Gold.”

“There are clues located in display cases in five of the upstairs rooms of the museum,” Milne said. “These clues can be used to open combination locks, vintage trunks and safes found throughout the museum and find the treasure.”

Milne said the escape room was added to the Lock Museum of America four years ago as escape rooms became a popular trend nationwide.

“I did an escape room with my wife and we found ourselves opening a lot of locks; I thought to myself we have a lock museum right in town so this would be a perfect fit,” Milne said. “It has been very popular and I expect that there will be a lot of visitors coming to try it now that covid restrictions are easing.”

Milne said in past years the escape room has attracted escape room enthusiasts from throughout the state as well as New York, Massachusetts and Rhode Island.

“We’ll be able to open just as we were, but we’re only allowing people who are fully vaccinated to sign-up and play the game,” Milne said.

Games can be reserved for Saturdays at 3 p.m. and 6 p.m., and Sundays at 3 p.m. Reservations can be made at lockmuseumadventure.org.