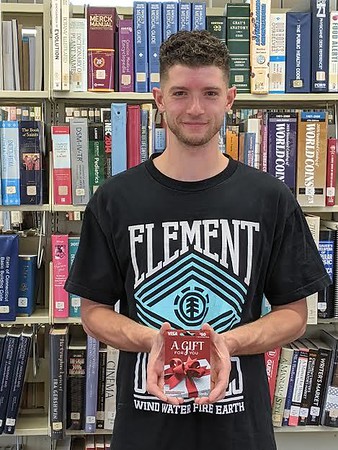 Nicholas Tichon has won the contest for Terryville Library's maker space, calling it the "CreationStation." -Photo submitted by Terryville Public Library Buy this photo
Published on Wednesday, 19 May 2021 11:09
Written by BRIAN M. JOHNSON

PLYMOUTH – Local youth Nicholas Tichon has won the contest to name the planned makerspace at Terryville Public Library, dubbing it the “CreationStation.”

A marker space is a “creative community workplace” where people can build things and experiment with art, craft and technology projects while sharing materials, tools and ideas.

The naming contest was held from Feb. 15 through March 30 and Library Director Gretchen DelCegno said that 23 names were submitted by the contest deadline. Tichon’s “CreationStation” received the most votes from among these submissions from the library’s Makerspace Working Group and the Library Board of Trustees.

DelCegno said that when Tichon was asked about his submission, he said he thought he had a good chance of winning because of the way that CreationStation rhymes.

“He also reflected on his memories of visiting the Imagine Nation Museum in Bristol as a young boy,” said DelCegno. “He noted that the name CreationStation was a bit of an homage to those happy experiences.”

Tichon won a $50 Visa Gift Card for having his entry selected as the winning name.

The library first brought up the idea of creating a maker space at a virtual meeting last August. Following this meeting, DelCegno reached out to “CT Hackerspace,” located in Watertown, and “MakerSpaceCT,” located in downtown Hartford, for input from those involved in previously established spaces.

The library then conducted a survey of residents through March of this year, asking residents what sorts of technology that the public would like to have included in the maker space.

As a result of this survey, the CreationStation will have 3D Printers, Cricut cutting machines, a Cricut Easy Press, audio and video editing and other equipment to explore science, technology, art and fabrication.

For more information, visit the Terryville Public Library website at terryvillepl.info or call 860-582-3121.

Terryville Public Library’s “CreationStation” maker space will have a soft opening this July.