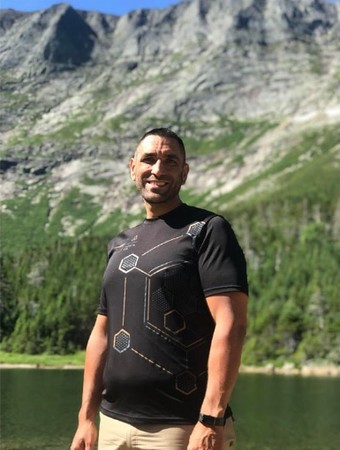 Ray was diagnosed at the end of 2016 when he was 350 pounds. After this, he spoke to a dietician who recommended that he download the ‚ÄúMy Fitness Pal‚Äù calorie counting app. He also began walking daily and going on weekend hikes with his family which has resulted in him losing 120 pounds.

‚ÄúI have two little boys, 10 and 12 years old, and we have hiked everywhere,‚Äù he said. ‚ÄúI used to hike Mount Katahdin in Maine with my dad before he passed away at the end of 2007. I did that walk with my kids and it was a big deal for us. We have also hiked in New Hampshire and we‚Äôve done the Newport Cliff Walk.‚Äù

Ray said that when he was diagnosed he had other complications including a blood clot in his portal vein which put him on blood thinners. However, as a result of his efforts, his health has improved.

‚ÄúSince I‚Äôve lost the weight, my MELD (Model for End-Stage Liver Disease) score has been reduced,‚Äù he said. ‚ÄúI‚Äôm still on the donor list, but my status is ‚Äòinactive‚Äô as it is no longer as urgent a need. I will remain there until I get worse but I hope to stay there for the rest of my life.‚Äù

When Ray was diagnosed, he said that he initially kept quiet about it. But, when he did start telling people, he received an outpouring of support from the Plymouth community.

‚ÄúA benefit dinner was held for me last November and 200 people showed up including the police union,‚Äù said Ray. ‚ÄúIt was very touching for me. During the Terryville Fair two years ago, my kids put up a lemonade stand for me and raised $1,000.‚Äù

Ray said that this support motivated him to become involved and help out others. He has volunteered for events organized by the American Heart Association, Down Syndrome awareness events, AIDS and hepatitis C awareness events. He participated in the Liver Walk last year as well.

Ray is now a student at Bellevue University pursuing a bachelor‚Äôs degree. To earn that degree, he needed to complete a service project and chose to help out the American Liver Foundation.

Ray said that it was ‚Äúpretty cool‚Äù when he found out that he had been chosen to be the ‚Äúevent champion‚Äù for the Liver Walk.

‚ÄúThey know my story and after I signed up this year, they called and asked me if I wanted to speak,‚Äù he said. ‚ÄúIt‚Äôs not always something that you get to do and it‚Äôs a good organization to support. This event will help to promote people‚Äôs well-being and education. It pushes people to get help from their doctors and get tested. People don‚Äôt know that just by being overweight they are at risk.‚Äù

The Liver Life Walk will begin at 8 a.m. with registration at Hubbard Park at 999 W. Main St., Meriden and then the event will take place from 9 a.m. to noon. There will also be a kids‚Äô fun walk, face painting and treats for children. Participants are encouraged to come in their best costumes.