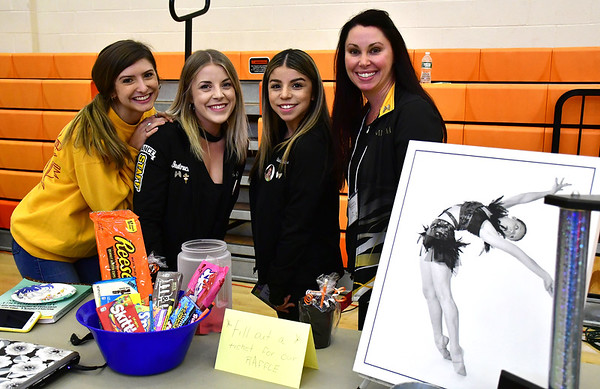 PLYMOUTH – Area students visited representatives from a variety of local businesses and gained exposure to a plethora of potential paths for future careers Friday at the Ninth Annual Terryville High School Career Fair.

Students participating in the career faith included ninth, tenth, eleventh and twelfth graders from Terryville High School as well as eighth graders from Eli Teri Jr. Middle School. There were also visitors from Gilbert High School in Winstead. Career professionals included a wide range of fields, from Thomaston Savings Bank to Cliff’s Automotive to the Police Explorers and the U.S. Air Force. They provided students with basic information about their field and some had items for students to inspect and hand-outs to take home.

Basher Alzouhi, an eighth grader, said that it was a good event to attend.

“I checked out the Air Force, physical therapy, the Police Explorers and the EMT table,” he said. “I’m interested in learning the sorts of skills they have and I think it would be fun to have a career where you help people.”

Gabby Iuliano, a ninth grader, said that she visited an art table where she was able to draw and paint.

“The career I am interested in is hairdressing through and they didn’t have a table for that,” she said.

Eighth grader Jordan Davis said he got a lot of information from the career fair.

“I was looking into careers involving machining and mechanics,” he said.

John Ellis, a junior at Gilbert High School, said that he was also interested in learning about a mechanical-based career. He said that he visited the table for Cliff’s Automotive.

“I took a test which said I’d be great as a mechanic and I love the smell of diesel,” he said. “I’m always fixing stuff with my grandfather. One time we found a pile of scrap metal on the side of the road and three months later we turned it into a go-cart which can go 20 miles per hour.”

Chase Roy, a sophomore from Gilbert High School, said he wanted to find a booth where someone was talking about computer design. However, he was still glad that he came.

Zachary Kirsch, a senior at Gilbert High School, said that he was making his rounds and looking at a variety of different options that were available.

“I was hoping to find something for more general business,” he said. “That’s going to be my major. I’m glad I came though – there’s a wide variety of stuff to look at.”