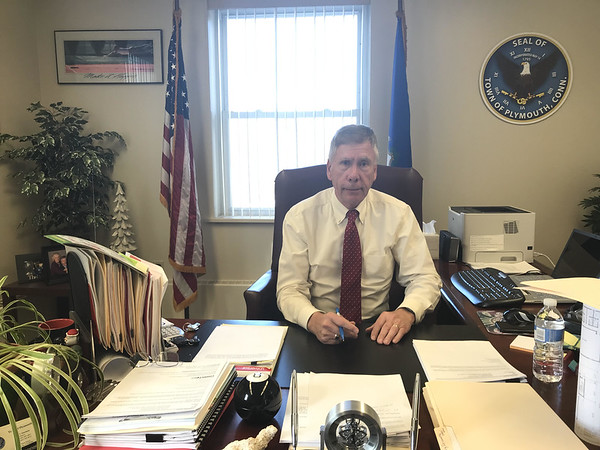 PLYMOUTH - Mayor David Merchant is deeply concerned about the potential impact to the town if Gov. Ned Lamont’s proposed budget is adopted as presented.

“I’m afraid of the consequences if this budget is approved as presented,” said Merchant. “Hopefully they will fix some stuff before they finalize it.”

As part of the proposed budget, Merchant said Plymouth will have to pay for $65,000 in teacher retirement costs. However, he said that next year that cost is expected to increase to $124,000. Merchant said that he has been opposed to towns having to take on a portion of teacher pension costs since the idea was first proposed.

“I fear that once it has been entered into the budget, it is never going away,” said Merchant. “It’s just like when (former) Gov. (Lowell) Weicker said some years ago that the income tax was only going to be temporary. Well, it’s still here. Why should small towns have to pay for these plans when we aren’t the ones who created them and we aren’t the ones that underfunded them for years?”

Plymouth’s education cost sharing (ECS) funding is expected to stay the same this year. However, if money from this fund is taken away like it was two years ago, Merchant said that the town could not absorb the additional costs.

“Two years ago, it wasn’t until September or October that we would receive $1.6 million less for our community,” Merchant said. “That’s a ton of money for a small town like us. But, we got through it by not replacing people who retired and the Board of Education didn’t do a lot of programs.”

Another area of concern with Lamont’s budget for Merchant is the idea of a universal mill rate for automobile taxes.

“Our rate is 39 and say they reduce it 19, we’ll have to send that money to the state and they’ll redistribute it as they see fit,” he said. “If we lose $3 million or more in automotive tax revenue, where will that money come from? The taxpayers will see automobile tax relief but if we then have to increase our town mill rate, nobody wins.”

“Our town stands to lose millions in revenue that we will then have to make up,” he said. “This serves no purpose as far as I can see.”

“They are working for us, but they are in the minority party,” said Merchant. “I just hope that they can appeal to legislators who also represent small towns and that the state legislatures will come to their senses.”