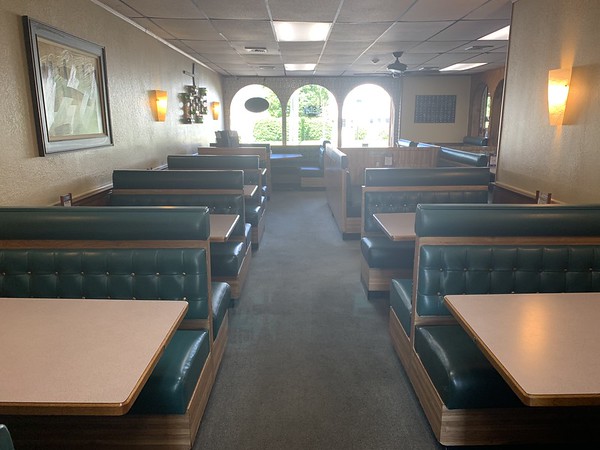 Phase two of Connecticutâ€™s reopening began Wednesday, which gives people the opportunity to eat inside of a restaurant for the first time since March. With plenty of new precautions being taken to ensure dinersâ€™ safety if they choose to eat indoors, restaurant owners that decided to open their dining room are unsure what the turnout will look like.

Some restaurants are choosing to stick with takeout-only service for the time being, but for those that open, the building cannot exceed 50 percent of its normal capacity and all occupied tables must be spaced at least six feet from each other, among many other precautions that are unfamiliar to the restaurant industry.

For Pavilion restaurant on King Street in Bristol, not much business came through the door during its first lunch service of phase two. The Italian restaurant has been offering takeout throughout the COVID-19 pandemic and did not make any adjustments to the dining room in preparation for reopening. Comprised entirely of booths, Steve Skenteridis from Pavilion said he will space people out appropriately as they enter the restaurant.

â€śWe havenâ€™t been that busy so far, itâ€™s the first day,â€ť Skenteridis said. â€śIâ€™m guessing itâ€™s going to be a little slow in the beginning because people havenâ€™t seen some of these places in a while now.â€ť

The energy surrounding phase two of the reopen for the My Wife Didnâ€™t Cook restaurant in New Britain is much more positive. Owner Divone Tanksley said the restaurant received calls Wednesday about availability, which was something that hadn't happened before.

â€śPhase two looks good,â€ť owner Divone Tanksley said. â€śWe did have some people call for some reservations. We [are not] normally a reservation place, but people called and asked if the outside dining was booked up. We had some people dine [inside] as well. Now is when we normally start to get busy for takeout so Iâ€™m wondering how itâ€™s going to look now that people have the option to dine in.â€ť

Tanksley said his takeout business was steady for much of the pandemic and people started taking advantage of the outdoor seating as well. He additionally believes having the outdoor seating made his restaurant more noticeable on the street, which brought in new business.

When it comes to people coming inside, he thinks there is still plenty of time before restaurants start to feel the way they used to.

â€śI think itâ€™s definitely going to take people some time to get comfortable,â€ť Tanksley said. â€śThis pandemic really mentally drained a lot of people. So some people are still not comfortable in public, some people are only comfortable with their families, but we have it set up so if you come with your family, you can stay six feet apart and not have to sit next to another family.â€ť

Tanksley thinks restaurants will actually have an easier time adjusting to the new hygiene standards because the already high standards restaurants are required to keep, which will make people feel better about returning to restaurants in the long run.

â€śRestaurants have always been on top in terms of cleanliness and sanitation because we deal with food and I think weâ€™re just going to tighten up on it a little bit more,â€ť Tanksley said. â€ś[We have to] make sure people feel comfortable and safe and they know that the food theyâ€™re getting is really clean.â€ť