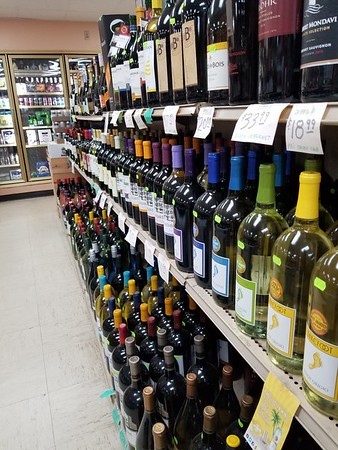 BRISTOL – After an initial period of panic buying, shopping at local liquor stores has regained a sense of normalcy, with customers realizing that shops will remain open.

Liquor stores, along with gun shops, hardware stores, pet stores and convenience stores, have been deemed as “essential” retail outlets by the state and will remain open despite many others having to shut down during the coronavirus outbreak.

However, that doesn’t mean the virus hasn’t had some impact on liquor stores all the same.

In Bristol, Maple End Package Store, which first opened in Bristol in 1945 under owner Marvin Friedman’s father, had been selected as a vendor for several community events. These events have since been postponed or canceled. Locally, Bristol Hospital’s Festival of Wines & Spirits is postponed to Oct. 3 and Imagine Nation’s From the Vine wine tasting has been postponed to June 24.

“All of the fundraising galas have been postponed,” said Marvin Friedman, owner of Maple End Package Store.

When the quarantining and social distancing first began, Friedman said there was an initial period of a few days of panic buying last week.

“People were acting like the world was coming to an end,” he said. “They are anxious and uncertain and a lot of them were stocking up. But once they knew that we would be staying open, they were reassured and things have gotten back to normal.”

“Friday last week was nuts; everyone thought that we were closing,” he said. “Saturday was still busy but things had more or less gotten back to normal. Things are back to normal now.”

“I don’t see any dramatic change,” he said. “We just have the local people coming in and buying what they need – a nip here or a nip there.”

Amid all the local business and restaurant closures, New Britain liquor stores are keeping busy.

“We’re only going to close if the government tells us to. Right now, we’re staying open and helping people in any way we can,” he said.

The coronavirus has brought a lot of panic to the community and Rashid said he doesn’t want to add to it. He already had a couple employees quit because of the situation and he has to pick up the slack.

“I’m working nonstop now, cashier, delivery, everything,” he said. “That’s the biggest impact for me. I tell my employees that there are people out there who have no money and no jobs because of the coronavirus. I know it’s scary but we have to do our jobs.”

Rashid, who also owns six local gas stations, has been giving out free coffee and small cakes to those in need. He also provides water and certain discounted items from the gas station shops.

“For me, it’s not about the business. This is a time to help each other. We’re all human and we’re all in this together,” Rashid said. “What we need to do is take action on people who take advantage of the situation. We all need each other right now.”

A similar sentiment is felt by Vijay Patel at the Step Up Package Store. The neighborhood store is still a popular place for people to drop by. The only difference for Patel is he now checks first on who’s coming in.

“I’m just making sure that no one who comes in is sick,” he said. “Otherwise, we’re just continuing on. Some days are busy and some days are not. Business is like normal.”

For himself, Patel said he isn’t worried about the situation.

Catherine Shen contributed to this story.