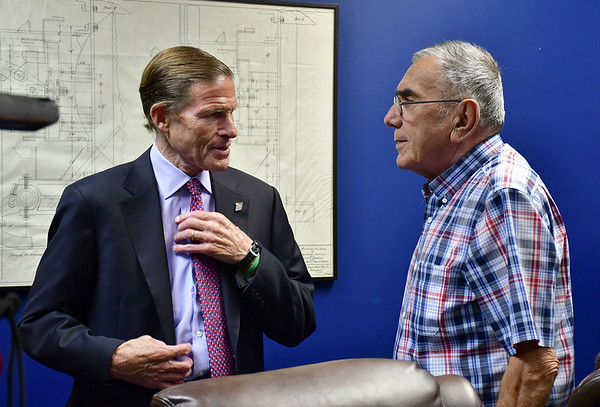 7/26/2019 Mike Orazzi | Staff Connecticut Senator Richard Blumenthal talks to employees at Pepco on Lake Avenue in Bristol during a tour on Friday. Buy this photo

7/26/2019 Mike Orazzi | Staff Connecticut Senator Richard Blumenthal talks to employees at Pepco on Lake Avenue in Bristol during a tour on Friday. Buy this photo

Prior to Blumenthal’s visit, President Bob Sposato explained that PEPCO has been around since 1922 and that he is the third owner, having taken over in 1984. They have been a supplier to Electric Boat for nearly 90 years.

“We make panels and control boxes – our equipment is used on six navy ships and one used by the U.S. Coast Guard,” he said. “We used to have 50% machine tooling contracts and 50% military but the machine tooling business has moved out of Connecticut. In the 1990s, Connecticut was not very business friendly. It is more friendly now than it used to be. Now 80% of the work we do is for defense submarines.”

When Blumenthal arrived, he accompanied Bob Sposato and Vice President Tony Sposato on a tour of the factory floor. Bob Sposato explained to him that modern submarines are lately automated.

Bob Sposato also explained that, 15 years ago, PEPCO designed a power plant to harness natural gas and provide their own electricity. They produce enough to give some back to the electric grid as well.

Tony Sposato said PEPCO currently employs 56 people. He said they planned to grow the company to 72 people within the next nine to 16 months.

Blumenthal was also shown a switch board panel. The Sposatos explained how the panels were tested to endure a 60 gallon spray for 15 minutes on the top and all sides in case of a pipe burst. He also explained how they were put through a shock test to see if they could endure a blast from 20 pounds of C4 explosives.

When the tour concluded, Blumenthal praised the work that the local manufacturer does.

“I am amazed and awed by the incredible quality of innovation and expertise that goes into the production of these panels, which go into the most advanced weapons platforms known to man,” he said. “What they produce here is essential to our national security and we are living in the most dangerous time in the history of the world. The only way that we stay safe is to stay ahead of our adversaries and this company enables us to do that.”

Blumenthal later greeted company employees, explaining how the U.S. was ahead of China and Russia in terms of submarines, but that they were trying to catch up. He praised the intelligence of U.S. manufacturers and engineers and said he was trying to visit as many factories like this one as possible.

“The American people need to support what you do,” he said. “The work you do is as important as our men and women in uniform. We don’t want to have a fair fight. We want supremacy on air, land and sea.”

Following the tour, Bob Sposato showed Blumenthal several vintage automobiles that he restored and refurbished as a hobby. He also showed him gardens and fruit trees around the factory property, explaining that the employees had regular pie-making contests. Bob Sposato handed Blumenthal a jar of peaches on the way out.