Laura Bailey Casey Cerruto rounds the bases after watching his ball go over the fence for a walk-off home run Wednesday. Buy this photo 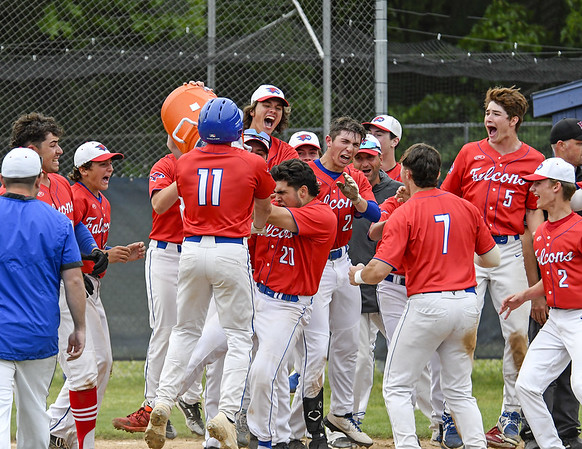 BRISTOL – The St. Paul Catholic baseball team went into extra innings before claiming a thrilling, 3-1, walk-off victory over St. Bernard on Wednesday. The top-ranked Falcons are among the final eight teams remaining in the Class S State Tournament.

St. Bernard took advantage of a Falcons miscue in the top of the eighth. Giuseppe Satti sprinted to first base after a dropped third strike, safely beating the off-target throw from catcher Casey Cerruto. A sacrifice bunt from pitcher Aidan Whitten advanced Satti to second base and into scoring position. Center fielder Luca Muscarella singled on a ground ball to left, driving home Satti.

“At that moment I thought we lost the game,” Cerruto said.

The Falcons were down 1-0 as they headed to the bottom of the eighth.

Shortstop Ryan Daniels stepped into the batter’s box with one out. The UConn-bound senior connected on a base hit to right field and advanced to second on the throw.  Power hitter Mario Izzo was intentionally walked, bringing Cerruto to the plate.

“Ryan got a hit to start off the inning. Mario, he’s a really good hitter, so they walked him. I knew it was my time to go up there and try to put a ball in play,” Cerruto said. “It was the first pitch, a pretty high fastball, and I really don’t know what happened; the ball went out,”

Cerruto, a senior captain, drove the ball deep over the left field fence, ending the game with a walk-off three-run homer.

The Falcons advance to the quarterfinals on Saturday, where they will face No. 9 seeded North Branford at home.