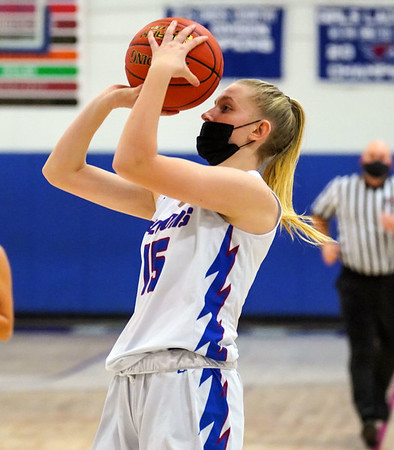 With the basketball postseason now in full swing, student-athletes are starting to receive their end-of-season honors and awards.

The state tournaments for girls basketball begin Monday and a handful of players from St. Paul and Goodwin Tech will enter their opening games knowing they played well enough to earn all-conference recognition.

As St. Paul’s leading scorer, Riemer led the Falcons to the third seed for the NVL Tournament and the fifth seed in the Class MM State Tournament, earning a bye through the first round. She dropped 24 points in the Falcons’ win over Watertown in their first conference tournament game and remained their go-to option when in need of a bucket.

Tice provided reliable scoring and defense all season for St. Paul, finding open threes and getting to the basket. She scored 19 points in the Falcons’ regular-season win over Seymour and helped St. Paul come within three points of the NVL Championship Game.

Lukaszewski led all scorers with 18 points in Goodwin Tech’s win over O’Brien Tech in the first round of the CTC Tournament. She served as one of the Gladiators most reliable all-around scorers and three-point shooters all season.

Aponte closed her high school basketball career with an all-conference selection she earned with strong play on both ends of the floor. A consistent scorer who plays hard defense, her contributions over the past few seasons will be missed.

Goodwin Tech trailed only Windham Tech in its division for the number of all-conference and honorable mention selections as Hernandez was a crucial part to the teams run to the CTC semifinals. Contributing in every way she could, she brought energy and hustle to a 14-win season.