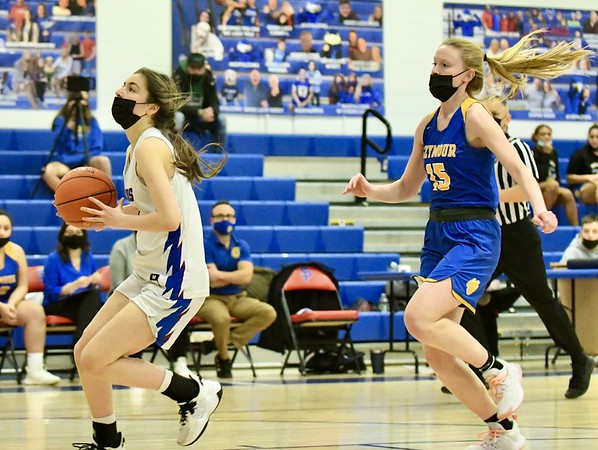 BRISTOL ‚Äē Mackenzie Sirowich‚Äôs 28-point effort was not enough for the Seymour girls basketball team to leave Bristol with a win over St. Paul.

The Falcons beat the Wildcats 57-49 and picked up their fifth win in a row to take sole possession of second place in the Naugatuck Valley League with a 9-1 record. St. Paul will look to extend its winning streak Friday on the road against Woodland at 6:45 pm.

Normally a team that likes to run and create fast breaks, the Falcons took control of this game when they decided to slow their pace after halftime. Leading by two at the midway point of the contest, they stretched their advantage to 11 by the end of the third quarter behind strong defense and 10 points from junior Nadia Riemer, who finished with 15.

‚ÄúI realized after the first quarter we needed to slow down, get a little more meticulous and get some open shots and maybe some drives to the hoop,‚ÄĚ St. Paul coach Joe Mone said. ‚ÄúFor the first time this year, we were erratic, like out-of-control fast instead of [keeping] a good pace. After that, we did a good job of having to make them work for shots.‚ÄĚ

Riemer was one of three St. Paul players to eclipse 10 points in the game, led by 19 from sophomore Audrey Tice along with 12 from freshman Izzy Leggett. Tice and Leggett did most of their damage in the second quarter when the Falcons took the lead they held until the final buzzer.

‚ÄúWe came together as a team,‚ÄĚ Riemer said. ‚ÄúIn the past couple of games either our offense is on our defense isn‚Äôt, but this game I feel like our defense and offense were on. Everybody was working hard and working together.‚ÄĚ

Trailing by four after the first quarter, the Falcons found their offensive spark from two of its youngest players. Leggett scored five straight points, including her second three-pointer of the night, to keep the score close before consecutive scores from Tice tied the game and then gave St. Paul the lead.

Tice scored nine points in the second quarter and was the recipient of many easy buckets created by her team‚Äôs defense. Three of Seymour‚Äôs final five possessions before halftime ended with steals for the Falcons and two of those steals yielded easy layups for Tice, including when she made the steal and went coast-to-coast for the lead-taking score.

Losing the lead was partially the Wildcat‚Äôs own doing as they missed eight free throws in the first half while St. Paul made its run.

Seymour brought the game back to a draw early in the third quarter, but the Falcons quickly went back in front with Riemer‚Äôs second three of the game. This was her first score since making the first shot of the game, also a three-pointer, and the first of two triples she made in the quarter.

St. Paul closed the third quarter on a 14-3 run after the Wildcats tied the score 30-30, greatly benefiting from the change in pace that allowed the Falcons to have more control of their offense while containing Seymour, which wanted to move faster.

Sirowich posted 10 points in the final period and scored eight points in a row to get the Wildcats‚Äô deficit within five, but they never came closer than that as the Falcons displayed the composure to hang on despite their opponent pressuring them more aggressively.

‚ÄúI think [Sirowich] is arguably the best player in our conference,‚ÄĚ Mone said. ‚ÄúI thought we did a great job of not letting her touch it, and when she did we did a good job of doubling her. The whole win is on defense‚Ä¶ I said before the game ‚Äėshe‚Äôs going to score, but I want her to work so hard that she‚Äôs exhausted on the bus ride home.‚Äô‚ÄĚ

St. Paul scored more from the foul line in the fourth quarter, netting seven of nine free throws, than from the field. Leggett converted a pair of foul shots to get the lead back up to 11 with two minutes remaining, leaving too much ground to cover for Seymour.