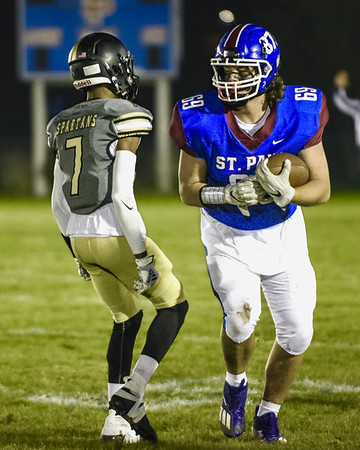 OXFORD - The season is over for the St. Paul football team and it did not end the way how anyone on the team wanted it to.

Falcons closed the year on the road with a 13-0 loss to Oxford (4-6) on Wednesday night to finish the season with a 2-8 record. This was St. Paul’s sixth loss in a row and third time being shutout this season as Joe Cianciolo enters his first full offseason as head coach.

Capitalizing in the red zone was a source of struggles for the Falcons as they did not get inside Oxford’s 20-yard-line very often and never finished their opportunities with points when they did get there.

“We let two chances slip away inside the 10-[yard-line],” St. Paul coach Joe Cianciolo said. “We just couldn’t punch it in. Credit to Oxford for defending the whole field and making us earn it.”

St. Paul had its best drive of the game in the second quarter when it took nearly nine minutes off the clock and covered 57 yards in 14 plays. The Falcons ran all of their plays out of the I-formation and found their most success running with seniors Isaiah Conner and Nick Dube. Oxford had no answers for Dube on fullback dives, which was a successful play-call several times on drive.

St. Paul reached first down and goal from the 10-yard-line, but failed to accomplish much from there as it gained three yards on its first two run and then took a delay of game penalty on third down. The next two plays ended with incomplete passes and Oxford took the ball back just before halftime.

“A lot of our inside runs were working and all we had to do was finish in the red zone,” Conner said. “That was our struggle this season, but in future years they’ll definitely get better at that.”

Oxford’s scores came at the start of the second and fourth quarters on runs from inside the 10-yard line. Starting from St. Paul’s 36-yard-line, the Wolverines ran eight plays on their drive and sophomore quarterback Matt McGuire finished it off with a 10-yard run to put the first points on board two-plays into the second quarter.

The second touchdown took advantage of a low snap on a St. Paul punt that forced the Falcons’ punter to fall on the ball and give Oxford a 16-yard field. The Wolverines scored two plays later when Nicholas Cuomo punched it in from seven yards away.

“They’re a really good running team,” junior Erik Suzio said. “They have a really good quarterback back there. You can tell he knows how to use his feet and break tackles. They run a little bit of a different thing, but we felt prepared. [Waterbury] Career [Academy] showed us that open gate look they use.”

Similar mistakes plagued St. Paul in the second half as its two drives before the failed punt ended with a fumble and an interception. The Falcons’ first drive of the second half ended on its third play after a handoff was mishandled, but they were fortunate to get the ball back several plays later when junior Jeremy Terveras intercepted McGuire near the red zone.

St. Paul only held onto the ball for three plays as Ryan Kilpatrick was picked off by Christopher Argonese, only to be bailed out by Teveras, who picked off McGuire again on Oxford’s first play.

The Falcons failed to get on the board the rest of the game, but showed solid defensive play throughout the contest and kept Oxford from adding more points in prime opportunities. The Wolverines nearly added a second touchdown before halftime when Ayden Ferrante started a drive with a 70-yard run with less than two minutes left in the quarter. St. Paul allowed Oxford to gain just three more yards before Suzio sacked McGuire on fourth down to get the ball back and kill a threatening drive.

“It would’ve been very easy for him to let [Ferrante] run in last 15 yards, but we truly played whistle-to-whistle and we ended up getting a stop off of it,” Cianciolo said.

Cianciolo will now enter his first offseason as head coach of the Falcons. He was officially hired in July and will now have a complete and proper offseason to prepare for next year.