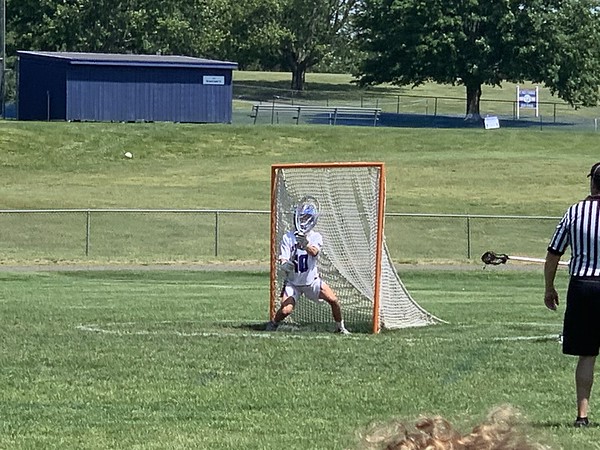 BRISTOL – Possessing the ball was a challenge for the St. Paul boys lacrosse team in the fourth quarter of its Class S quarterfinal game against Somers.

Garnering a four-goal lead, the Falcons’ played defense for nearly 10 minutes consecutively to start the final period and allowed the Spartans to go on their only run of the game, tying the score with four straight goals. St. Paul had an answer for everything Somers did and it was held down by a 23-save performance from senior goaltender Connor Matthews en route to a 13-11 win, earning a spot in the state tournament semi finals..

Matthews’ kept the Spartans offense quiet for most of the contest as he made stops consistently for 48 minutes, keeping his team head no matter how the offense was performing and regardless of how much time his team spent down a player.

“Connor [is] a brick wall, he went off,” senior attack Christian Decker said. “Connor has been going off, he’s been hot and we really need it. He’s been playing really, really well. We really need it so we’re really appreciative of that.”

Matthews anchors a defense that allowed fewer than 10 goals in 13 games this season and displayed why against Somers. A talented and experienced program, the Spartans never led by more than one goal and never scored more than twice in a row outside of their run in the fourth quarter.

The Falcons also displayed the strength of its defense when missing a player as they committed eight penalties to give Somers five and half minutes with a one-man advantage over the game. Matthews held his opponents scoreless on several occasions with a teammate serving penalty time making three saves in a row on one possession while the Spartans tried to tie the game before halftime.

“Keep your eye on the head of the stick, follow it with your head and make sure you can save it,” Matthews said.

One of the keys to St. Paul’s success, head coach Chris Kennedy said they played a schedule that prepared Matthews to succeed against top competition. He has experience against talented players and is more than capable of making the stops necessary to beat other good teams.

“We scheduled a really tough stretch at the end [of the regular season] to get ourselves ready for this and over the whole stretch he has been absolutely amazing in close [and] far away,” Kennedy said. “In every huddle I say make them beat Connor from outside because not many people can. If we do that, we’re putting ourselves in position to play good defense.”

Matthews will face one of, if not his greatest challenge of the season Wednesday in the Class S semifinals when St. Paul hosts 17th-seeded St. Joseph. The Cadets are two-time reigning Class S champions and the team that eliminated the Falcons’ seniors in the state quarterfinals when they were freshman.

Every player is going to need to play well for the Falcons to be successful, but likely none more than Matthews, who will see an onslaught of shots from the opening faceoff.