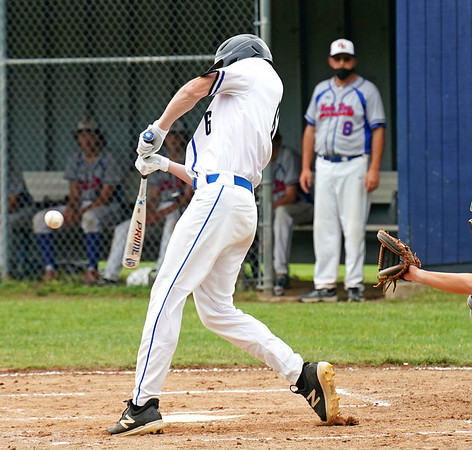 BRISTOL – A back and forth affair in the second round of the Class S state tournament needed extra innings as two runs in the bottom of the eighth propelled top-seeded St. Paul to the quarterfinals with a 5-4 win over Hale Ray on Wednesday.

Sophomore second baseman Devin Kulas’ single drove in the winning run from third base to give the Falcons the walk-off victory. The teams’ were tied 2-2 after two innings as both starting pitchers will dialed in for most of the game, limiting base runners throughout the contest.

Sophomore Jamie Leggett picked up the win after leaving center field to relieve senior Owen Davis who logged seven innings of work and saw the first two batters of the eighth. Hale Ray senior Matt Lauria reached his pitch limit in the sixth inning after allowing three runs and striking out eight.

St. Paul will host 24th-seeded Shepaug Valley on Saturday for a shot at the semifinals.

“I told Owen and Shaun Remillard they were seniors today, they led the team, they went out there and took charge,” head coach Vic Rinaldi said. “Owen was unbelievable on the mound, he pitched a great game. He battled, kept us in it, he gave us a chance to come back late and that’s what you want.”

Tied 3-3 after five innings, both teams were held scoreless for the final two frames of regulation despite the middle of both teams’ batting orders getting an opportunity. The Noises got on the board in extras with a double from Oliver Ross who was driven in on the next at bat by Lauria, who was later thrown out trying to steal second.

Leggett came in for Davis after the single, striking out the first batter he saw. He then walked Cam Watkins who almost scored on a double from Aiden Clarke, but was thrown out at home on a relay to end the inning.

“Every time I pitch, I don’t want to throw balls,” Leggett said. “I want to get it over the plate, I want kid hitting it.”

Junior third baseman Mario Izzo singled to open the bottom of the eighth and then a double from senior Shaun Remillard put the tying and winning runs in scoring position. A sacrifice fly from Steve Morelli advanced all runners and scored the tying run and Kulas drove the winning run home on the next at bat.

One run was scored in each of the first four half innings, highlighed by a solo home run from Davis in the bottom of the second that just curved around the left field foul pole.

The next two innings were scoreless until junior Miles Gagne gave Hale Ray a 3-2 by leading off the fifth inning with a solo home run to center field. The Falcons answered back in the bottom half as Kulas reached on a fielders choice, got to third with a erron and a base hit, and then scored to tie the game on a ground out by junior catcher Casey Cerruto.

St. Paul’s defense was crucial to the victory as many players contributed to plays in the field that saved runs or prevented baserunners. Leggett made is presence felt before taking the mound as he robbed Gagne of an extra-base hit with a diving catch.

“Being scrappy, that’s what coach Vic was preaching to us all week,” Leggett said. “We’re going to have to make big plays down the stretch and we did.”