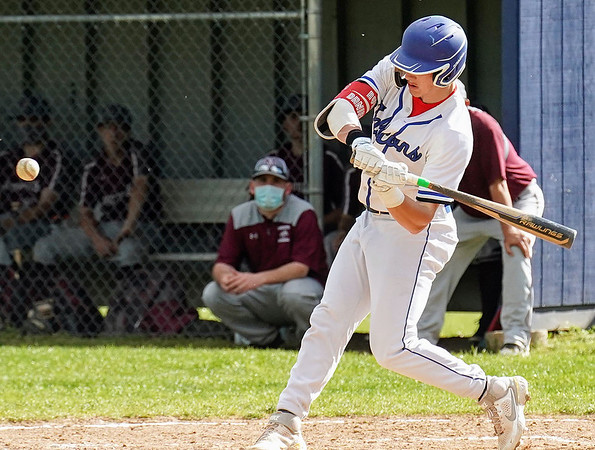 Ryan Daniels eyes a pitch earlier in the 2020 spring season. | Dan Heary Buy this photo
Published on Friday, 14 May 2021 21:03
Written by MATT HORNICK

BRISTOL - The winning streak is up to 14 games for the St. Paul baseball team behind a 16 hit performance to beat Naugatuck 10-0 in six innings.

Everyone who batted for the Falcons picked up at least one hit today with five players notching at least two hits, as the team stayed for another day during this unbeaten streak. Junior shortstop Ryan Daniels drove in five of his team’s runs as part of his three-hit day that also featured a pair of home runs he blasted to center field. Daniels now has 14 long balls on the year.

“We faced the pitcher in Naugatuck the first time we played them, he likes to keep the ball away to righties and works his offspeed, he’s got a little sink to his fastball, so we’re looking to go middle, opposite field,” head coach Vic Rinaldi said. “Our guys have had a good approach all year and it continued [Friday].”

Junior Brendan Foley was the winning pitcher in more than four innings of work. He struck out eight and only allowed three hits while leading St. Paul to its fourth shutout win of the year.

“When I’m out there, I try to put the pressure on the hitter,” Foley said. “I try to attack away, but for the top of the order I try to go inside. Especially for the two-hitter, he squared one off me on an outside slider over the fence last time. This time we attacked him inside and we got him pretty well.”

Sophomore designated hitter Steve Morelli opened the scoring for the Falcons in the second inning with his first of three hits from the ninth spot in the batting order. Morelli boosted a pitch from Naugatuck pitcher Brady Evon into the outfield for a double, plating sophomore left fielder Jon Remillard. Daniels drove in Morelli to earn his first RBI of the day with a single.

“[Morelli] is not a prototypical nine hitter, but the lineup works right now with him in the nine spot where he’s getting on base and setting up the top of the order,” Rinaldi said. “Then those guys at the top are getting on and setting themselves up for Daniels, Cerruto and Izzo.”

A scoreless third inning put the top of the batting order at the plate for the Falcons to start the fourth and more runs came quickly. Sophomore center fielder Jamie Leggett reached first on a single and Daniels found his pitch on the next at bat and pumped his first homer of the game.

“I was looking fastball, I didn’t get many,” Daniels said. “The first home run, I was pretty deep in the count, it was a curveball and he hung it, and he doesn’t hang many, he’s a really good pitcher so everything was low and outside, but that one he hung and I got it.”

Morelli started another scoring run in the fifth, this time with two outs, with a single that the Greyhounds’ right fielder misplayed and allowed Morelli to reach second. Sophomore second baseman Devin Kulas plated Morelli with a double, Leggett plated Kulas with a single and Daniels connected with another pitch and sent it over the wall, making the score 8-0 after five innings.

Kulas ended the game in the next inning with a bases-loaded double that the two runs necessary to inflict the mercy rule.

Senior Shaun Remillard took over for Foley in relief to get the final five outs. Rinaldi said he felt comfortable using his pitchers a little more freely with the team off until Tuesday. The Falcons will travel to Watertown for their second to last regular season game, they beat Watertown 22-12 at home April 23.