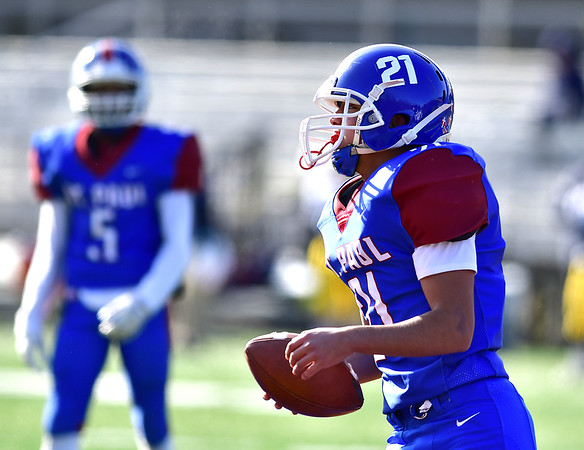 WATERBURY — It’s no secret the St. Paul football team is at its best when its run game is working efficiently and effectively.

That was certainly the case Saturday morning against Kennedy.

Led by senior Max Peruta and junior Josh Silva, the Falcons ran for 248 yards and three touchdowns to beat the Eagles 18-13 for their second win of the season.

“Another outstanding job from the offensive line,” St. Paul head coach Jude Kelly said. “I applaud our running backs for getting a little tougher and getting some tougher yardage.”

The Falcons took the lead late in the third quarter on a 7-yard run from Peruta after a 21-yard carry by Silva combined with a Kennedy personal foul moved them into the red zone. Peruta finished the game with 118 rushing yards on 20 carries.

The Falcons opened up the scoring by taking advantage of a shanked punt from Kennedy on the Eagles’ own 24-yard-line. After Peruta’s return set up his team seven yards away from the end zone, Silva crossed the goal line on the next play. It was the first of two scores for the junior, who capped off the win with a 2-yard touchdown run in the fourth quarter.

Silva ended the game with 93 yards on the ground and averaged 7.8 yards per carry.

“The offensive line doing their jobs blocking and making holes,” Silva said. “If it wasn’t for them I wouldn’t have been able to do anything at all, really.”

Added Peruta: “Our offensive line every week is the hardest working unit on the whole team. Every week they go out and bust their butts so our running backs can put up big numbers.”

But part of what made St. Paul’s run game so effective on Saturday was its ability to alter its usual game plan of running outside the tackles to one that featured a heavy dose of inside runs.

“They were fast and they were outside so they were defending that pretty good so the inside run was our best bet,” Kelly said of his reason for switching up the Falcons’ game plan. “The two backs, especially Silva, did the majority of the blocking and Max ran behind him and then vice versa sometimes as well.”

As efficient as St. Paul’s offense was, so too was its defense, which posted its best performance of the season. The Falcons allowed a season-low 13 points, seven of which came with 4.5 seconds remaining on the clock. And even though the Eagles failed to score in each of their last three games, Kelly said he was still pleased with what he saw from his defense.

“We got a couple of three and outs which I always like to see and got the ball back to the offense,” the head coach said. “Didn’t really give them any big plays until the end.”

With the toughest part of their schedule behind them the Falcons will look to finish strong at home in their final two games of the season starting with a matchup against Torrington on Nov. 15.

Matt Hornick can be reached at mhornick@centralctcommunications.com

SP–Josh Silva 7run (two-point conversion attempt is no good), 4:19a