Fall season gets into full swing with plenty of interesting soccer, volleyball matchups in coming week 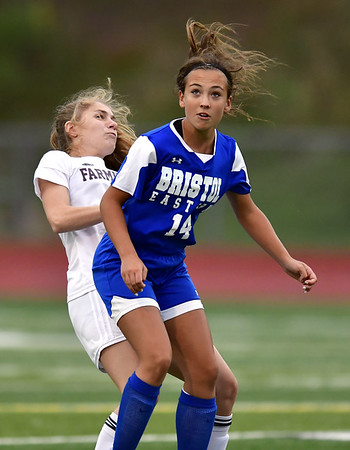 The high school season moves into full swing this week with attractive battles on the soccer pitch and the volleyball court as well as in the woods looming in the week ahead.

Bristol Central will welcome Lewis Mills to the CCC Southern division with matches in soccer, volleyball and cross country this week, while Bristol Eastern boys soccer squares off against defending state champion Plainville in a crucial early season divisional test on Friday.

It was a mixed bag for area soccer teams in last week’s opening day action, with a couple of pretty impressive victories by the Bristol Central girls and Bristol Eastern boys and a thrilling rally to tie for the Eastern girls, but it was a struggle for the rest.

St. Paul’s boys have yet to make their debut and will open the season tonight at home against Holy Cross. The Crusaders were 8-4-4 a year ago and will also be opening the season today. The Falcons visit Wilby on Tuesday and Naugatuck Friday to round out a busy opening week.

The Bristol Eastern boys made a statement with a 3-0 win over Conard in their opener, as Jake Woznicki showed that he will be a force to be reckoned with this season by scoring all three goals. The Lancers are home against Windsor tomorrow night before traveling for their big showdown in Plainville on Friday.

The Bristol Central boys dominated a tough Avon team but could not put the ball in the net in their opener and came away with a disappointing 1-0 loss. The Rams host Hartford Public on Tuesday before traveling to Burlington for the CCC South debut of a very strong Lewis Mills team on Friday afternoon.

Terryville’s boys were also disappointed in their opener, a 2-1 loss to Housatonic. The Kangaroos will look to turn things around at Wamogo tomorrow in their only match of the week.

The Bristol Central girls came away with a very solid victory over Hall in their opener and will look to build on that success at Hartford Public tomorrow as they prepare to take on Lewis Mills at home on Friday afternoon.

Bristol Eastern rallied with two late goals to stun a powerful Farmington team in a 2-2 tie in their opener last week. The Lancers will travel to Newington tomorrow and host Plainville on Friday afternoon as they look to build on the momentum of the opening result.

St. Paul and Terryville both struggled in their openers and will need to use the week ahead to regroup. The Falcons host Woodland on Tuesday and Naugatuck on Friday as they host some of the top tier NVL squads. Terryville will travel to Litchfield to take on Wamogo on Tuesday in its only game of the week.

Area volleyball teams will be trying to build on a successful early season effort with a busy schedule this week. Bristol Eastern knocked off Farmington in a rematch of their state tournament battle of a year ago to open the season and will take on New Britain tonight and Plainville on Wednesday, both on the road.

Bristol Central managed to take a game from perennially strong Southington in its opening day loss and will use that as a positive springboard as they travel to Newington tonight and Lewis Mills on Wednesday before coming home to take on Conard on Friday.

St. Paul’s volleyball team opened with a win over Watertown and will travel to Naugatuck tomorrow and host Sacred Heart on Thursday. Terryville will make its season debut at home against Housatonic tomorrow.

The Bristol Central cross country squad has had a successful start to the season, but faces one of its bigger CCC South challenges this week at Middletown along with Lewis Mills.

The Central boys have overcome some early season injuries and will look to continue their unbeaten streak, while the girls team is also unbeaten but will face a difficult challenge in this week’s action.

The Eastern boys are also unbeaten and will travel to Plainville where they will face a challenge from both the Blue Devils and Berlin. The Berlin girls are the preseason favorites in the South division and will be a difficult hurdle for the Lancers to overcome.

St. Paul’s runners are at Torrington along with Naugatuck and Terryville hosts Housatonic and Litchfield on Tuesday.