Season Preview: St. Paul football will look to have more balance on offense and spread ball out more 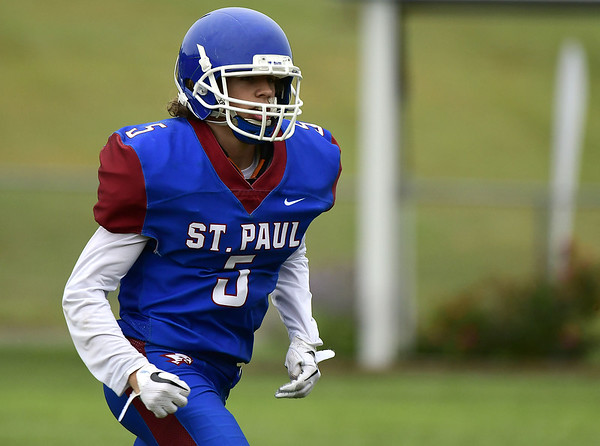 Even through five decades of football as a player and a coach, the philosophy for St. Paul football head coach Jude Kelly has changed very little as far as the type of offense and defense he runs.

“I’ve always felt you have to have an offensive or defensive philosophy that you really believe in that can be sound,” Kelly said. “You’ve got to figure out what works for you and sell it to your coaches and your team. That really could be anything.”

“Anything” has meant a lot of things for Kelly over the years. Whether it’s the wishbone, wing-T, I-formation or the spread offense, Kelly has used them all at his programs. But no matter what - whether his offense is led by a quarterback who can sling it or a fullback who can bulldoze through the line; or a defense that can lay people out or one that creates turnovers - there needs to be an identity.

“My thing has always been, I want to be something,” Kelly said. “I want to be a defense that can stop the run or stop the pass. And offensively, whatever we do, we do it, and we do it well. I’ve never been into ‘let’s do a lot of things a little bit.’ You adjust with the times and personnel and with the input from assistant coaches.”

The adjustments for the Falcons this season will be to have more balance on offense and to spread the ball out more than it has in years past. That’s how many of Kelly’s teams were at Southington in the 90s and early 2000s, teams that would sometimes run no-huddle and speed up the pace of the game.

At a small school, however, that’s not as conducive to success with a team that has much fewer players than a larger program like Southington and must play most of its players on offense and defense.

“If your offensive guys are the same guys on defense, you’ve got to slow the game down,” Kelly said.

One of those players is Brycen Kennedy, the Falcons’ first-year starting quarterback who will be taking over from three-year starter Kevin Ashworth, a veteran who had a strong understanding and command of the offense.

After one year under his belt as the team’s starting safety, the junior Kennedy will now have to lead the team from the other side of the line for the first time.

“Being called on to be a leader, obviously, is an honor,” Kennedy said. “But the big thing is everyone has their head on straight. It’s not like I have to be on the guys all the time because everyone knows what they’re supposed to be doing, and we’ve got coaches who are on us 24/7.”

Kennedy says being a vocal leader is important, especially in a position where he will have to interpret calls from the sidelines, make the correct pre-snap reads and make fast decisions with the ball.

“We love to run the ball. That’s St. Paul football. We love to run, change it up and mix things, run in different gaps, so it’s really important to understand what I’m doing from my sideline,” Kennedy said.

There will be multiple offensive layers with more positions utilized this season and with more motion pre-snap.

“We’re bringing things teams won’t expect from us because of things we’ve done the past few years with just running the ball,” Kennedy said.

One of Kennedy’s favorite targets projects to be 6-foot-3 wide receiver Max Peruta, a senior who doubles as a defensive end/outside linebacker.

“We’ve been friends since elementary school so it’s really always clicked for us,” Peruta said. “[That chemistry] helps a ton because I always know he’ll get the ball where it needs to be, and he knows I’ll always be where I need to be.”

Peruta wasn’t just excited about the prospects of catching touchdown passes from Kennedy. Just like Kennedy and the rest of his teammates, they’re ready to get to work under the lights.

“There’s no smell like football,” Kennedy said. “You’ve got to love that because it’s all hard work.”

Added Peruta: “There’s always that thing that just gets your stomach going with football. It’s time to go. I’ve been playing since I was 6 or 7 years old, and it’s always been like that. I just need to take that first hit, and I’m ready to go. It juices you. There’s nothing like it.”