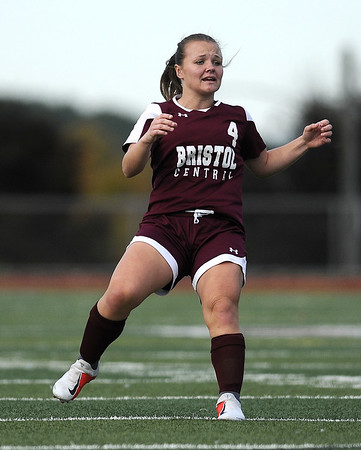 BRISTOL - After struggling to stay healthy last season, the St. Paul girls soccer team will look to get back to championship form in 2019, while Terryville returns nine starters to the pitch.

Meanwhile, Bristol Central and Bristol Eastern each have a top-tier goal scorer to replace, but each team has a good returning core and solid young talent to build around.

Outlook: With a large group of talented players returning, the Rams’ season looks to be a promising one for Godbout’s group, one that also has several young players who will “look to make a statement this season,” Godbout said. “There were many games last year that were heartbreaking for us, and the girls are ready to change that.”

With the loss of Malick, who scored 20 goals, and a strong defender in Erika Santilli, the team’s youth will have to make contributions.

“We have a strong defense, and I believe that one of our strengths will actually be that we have a number of threats to score instead of relying on one player,” Godbout said. “With Bristol Eastern, Plainville and the addition of Lewis Mills, the conference will be tough. However, I think once we get our rhythm we will definitely be a contender.”

Outlook: After losing a lot production from last season, there are a lot of unknowns for Redman’s club, but that hasn’t dimmed the coach’s optimism, despite the Lancers having to replace the program’s all-time leading scorer in Croze.

“We’re excited about our core returning and some young players that primed to contribute right away,” Redman said. “Replacing Myah will be extremely challenging but one we are prepared for.”

“It’s still too early to tell the ceiling for this team as there may be some growing pains early,” Redman said. “But the potential to improve throughout the season will be exciting to see.”

Outlook: Celine Gambuzzo, Emily Biscoglio and Juliet Watson are the only seniors returning with varsity experience, and each will play key leadership roles.

Goalkeeper Nina Zolwinski leads the way, however, after a freshman season in which she earned first team All-State in 2017 and missed the entire 2018 campaign after chipping a bone in her ankle in the season opener against Holy Cross.

The Falcons return a group of talented players, but they will still be young with only three or four seniors seeing significant playing time.

“If healthy, we have a good chance to return to our championship form of 2017 when we won the NVL championship and reached the Class S state tournament semifinals,” Husbands said. “The league powerhouses should be the same this year - Watertown, Woodland, Holy Cross and Naugatuck, all teams we play in the first six games of the season.”

Also, if Zolwinski earns All-State accolades again this season, she will be the second St. Paul player in the last four seasons to earn that distinction, joining Kendall Davis, who was an All-State performer in 2016 and 2017.

Outlook: Despite low numbers and a lack of depth, Rosano believes his Kangaroos will be able to field a talented team.

“We are going to count heavily on the returning players that we have to provide quality on the field and to play a lot of minutes,” Rosano said. “Luckily, I’ve been impressed with the fitness of this group so hopefully playing a lot of minutes won’t be too much of an issue.”

Rosano says the club’s goal, as it is every season, is to reach the state tournament, which the program has not done in three years.

“With nine returning starters, I think that’s a realistic goal,” Rosano said. “However, to reach it, we need to stay healthy and improve during the course of the season.”

“We certainly expect her to equal of surpass that total in her second year of varsity soccer,” Rosano said. “We are also counting on the contributions of a strong junior class, most of whom have played varsity soccer since they were freshmen.”