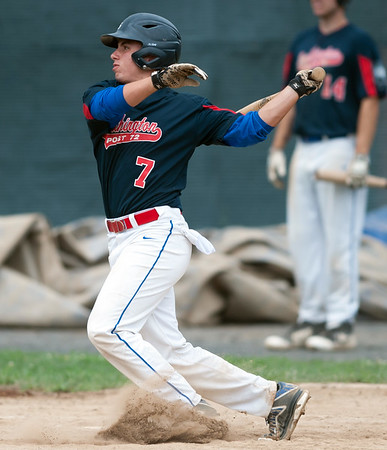 GLASTONBURY - Leading 2-0 over Southington in the top of the seventh inning on Sunday, the Bristol American Legion baseball team was two outs away from a 2-0 start in the South Windsor Super Regional and advancing unscathed to the title series of the double-elimination bracket.

But after Southington’s Ethan McDonough roped a one-out RBI ground-rule double, Sean Crean - a 2019 St. Paul graduate - knocked McDonough home with a game-tying single. Crean then stole second and third base and sprinted home for the go-ahead run on an error, and Josh Panarella roped a two-run homer for a decisive 5-2 lead at Rotary Field.

Carson Sassu reached base in the bottom of the seventh, but Southington (22-7) polished off the victory by inducing Noah Plantamuro’s game-ending groundout to send Bristol (22-7) to a 6:30 p.m. elimination game Monday against Waterford.

The winner of Monday’s game will face Southington on Tuesday evening, needing to win that game to force a winner-take-all contest on Wednesday.

Bristol took a 1-0 lead in the first inning, as Josh Nohilly hit into a ground ball fielder’s choice with the bases loaded. The club added its second run in the bottom of the fifth, as Nick Ruffino and Sassu reached on singles to start the inning, Sassu’s coming on a bunt.

After Noah Plantamuro laid down a sacrifice bunt to move Ruffino and Sassu to second and third, Ruffino was picked off third base for the second out. Cory Fradette then roped an RBI single to score Sassu for the 2-0 lead.

Bristol starting pitcher Jagger Duquette threw 6 1/3 innings and was replaced by Plantamuro, who took the loss, with one out in the final inning. Duquette was charged with two earned runs.