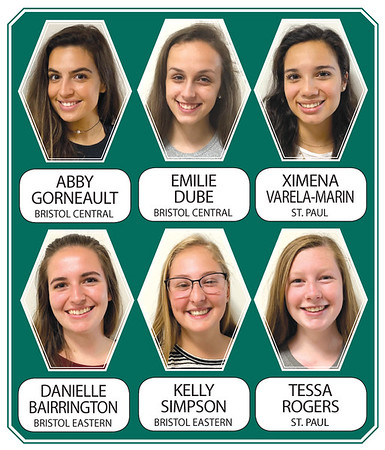 Two members from each of our area programs line our 2018-19 All-Press Girls Tennis Team, as Bristol Central, Bristol Eastern and St. Paul each boast a pair of standouts on the court.

For Bristol Central, both Abby Gorneault and Emilie Dube were selected. Gorneault, the Rams’ No. 1 singles player, was named to the all-conference team three times and was a two-time captain. The senior in 2019 reached the state tournament to cap a successful career.

Dube, the No. 2 singles player for the Rams, rose up from being on the team’s No. 2 doubles pairing as a sophomore to the No. 1 doubles team as a junior.

Dube helped the Rams to the state tournament in her sophomore campaign and as a junior won the team’s sportsmanship award. As a senior, she was named a team captain and earned All-Academic honors. Dube signed her national letter of intent to continue her playing career at Northern Vermont University.

Bristol Eastern also had a pair of senior standouts in Danielle Bairrington and Kelly Simpson.

A successful season for St. Paul that saw the Falcons reach the Class S state tournament as a team, earning a 13-seed and falling to Litchfield, was led by Ximena Varela-Marin and Tessa Rogers.

Varela-Marin was the No. 1 singles player, earning All-NVL honors and qualifying for the State Open after a 13-1 mark for the Falcons, and Rogers, who also finished 13-1, qualified for both the State Open and the Naugatuck Valley League individual tournament.

“Overall, the team had good success this season,” Rogers said. “Ximena did great. She had the same record. She only had one loss all season and was the runner-up for individual NVL. She worked really hard to get there. Everyone worked hard to make sure we would accomplish our goal of getting to the state tournament, which we did, and everyone put in an equal amount of effort to make sure we all had a successful season.”