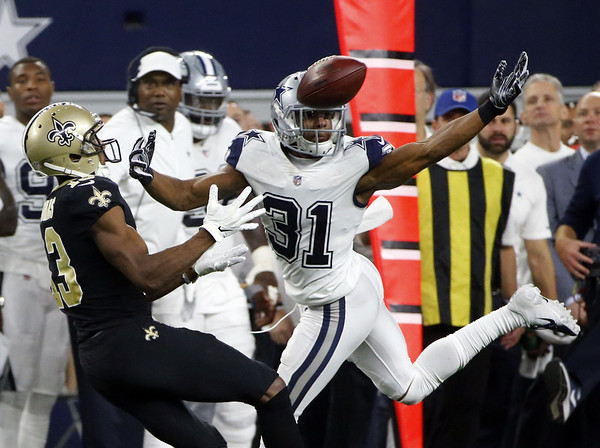 NEW BRITAIN - At the tail end of his third season in the NFL, Byron Jones‚Äô career came to a bit of a crossroads.¬Ý

He had been no slouch, starting 43 of his first 48 games after being a first-round draft pick. But the last several games, Jones said, didn‚Äôt go well.¬Ý

That‚Äôs when his career took an upward trajectory with the hiring of Kris Richard as the Cowboys‚Äô passing game coordinator and defensive backs coach.¬Ý

Richard, instrumental in the development of the Seattle Seahawks‚Äô ‚ÄúLegion of Boom‚Äù defensive backfield of Earl Thomas, Richard Sherman and Kam Chancellor, instantly became just as critical for Jones.¬Ý

One of Richard‚Äôs first moves was to switch Jones from safety back to his natural cornerback spot, where he was better able to utilize his length, speed and adept coverage skills.¬Ý

That change led to a breakout, career year for Jones in 2018, in which he showcased his man-to-man guarding skills against Michael Thomas, DeAndre Hopkins and Odell Beckham Jr., and earned his first career trip to the Pro Bowl, in addition to second-team All-Pro honors.¬Ý

‚ÄúTo be able to play a position where I‚Äôm covering 100 percent of the time, it just suits my strong points,‚Äù Jones said. ‚ÄúIt‚Äôs been a blessing to have coach Richard come in there and teach me his system and teach me his technique, because I was able to flourish within a year.‚Äù

Jones earned analysts‚Äô praise as one of the NFL‚Äôs elite cover corners, and his stats backed up those assertions. Per Pro Football Focus, Jones finished with an 83.3 percent coverage grade, allowed just a 53.6 percent catch rate and amassed 10 pass breakups, numbers good enough for PFF to rank him as the fifth-best corner in 2018.¬Ý

‚ÄúJones‚Äô season at corner was so dominant it makes you wonder why he was ever stuck at safety in the first place,‚Äù wrote PFF‚Äôs Michael Renner.¬Ý

Jones worked hard. He always has, ever since being just a two-star recruit out of high school.

He was able to parlay his lone scholarship offer at Randy Edsall‚Äôs UConn‚Äôs program into one of the best performances at the 2015 NFL Draft combine, the 27th overall selection and eventually his 2018 ascension that included a playoff berth and a ‚Äúspecial trip‚Äù to Orlando for the Pro Bowl.¬Ý

Florida is where he learned from a pair of the NFL‚Äôs best, Malcolm Jenkins and Mike Evans, picking their brains to prepare for the upcoming offseason and 2019 regular season.¬Ý

‚ÄúThe Pro Bowl was special, because you were around the best guys who play football,‚Äù Jones said. ‚ÄúJust to be around those guys and talk to those guys was awesome. For me, it was a business trip. I was just trying to learn as much as I can, asking them about how they prepared for the season and after the season. It was a really important period for me. I loved it.‚Äù

Whether in Orlando, Dallas or New York, the 6-foot, 205-pound corner has locked down some of the NFL‚Äôs elite talent, saying it‚Äôs hard to pinpoint the most difficult cover.¬Ý

‚ÄúIt‚Äôs so tough, man. You‚Äôve got Michael Thomas, Mike Evans, DeAndre Hopkins, [Antonio Brown], Odell Beckham. All the guys you hear about, they‚Äôre all hard to guard. I got a piece of every one, and they‚Äôre all tough,‚Äù Jones said. ‚ÄúI don‚Äôt [trash talk] much, man. I‚Äôm trying to catch my breath. I‚Äôm too tired.‚Äù

Jones now heads toward an uncertain future, not sure whether or not the Cowboys will re-sign him after the 2019 season, in which he will earn $6.26 million and is designated to become an unrestricted free agent in 2020. He also must combat offseason hip surgery that has thrown him off his typical routine and will force him to miss mini camps and OTAs.¬Ý

Jones says it‚Äôs ‚Äúcompletely uncharted territory‚Äù for him because he‚Äôs always been able to prepare for six months heading into a new season.¬Ý

‚ÄúI haven‚Äôt been able to have that, and I may have to get going with just a couple weeks under my belt,‚Äù Jones said.

‚ÄúIt‚Äôs a fun challenge for me. That‚Äôs the way I look at it. It‚Äôs a piece of adversity. You can‚Äôt avoid it. It‚Äôs just something that makes the story better.¬Ý

‚ÄúI think this is gonna be a very important season for me. I wanna be able to hold my weight for the team like I did last year, so I‚Äôm doing everything I can to be 100 percent. ‚Ä¶ I‚Äôm not trying to take any steps back.‚Äù