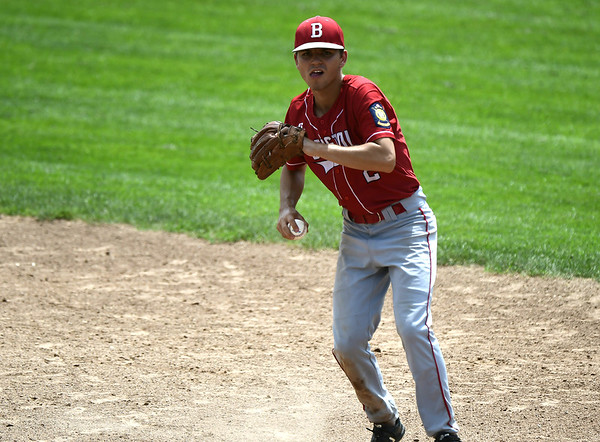 Bristol took a 2-0 lead on a first-inning run by Noah Plantamuro on an error and another Berlin error in the third inning allowed MacGregor Goulet to score from second. But in the fourth, Berlin (2-1) went to work.

Ryan Hyde punched a deep two-run triple to the right-center field gap on a 3-1 count, tying the game at 2-2 on a fly ball over the outfieldersâ€™ heads after Gianni Fanelli and Paul Dâ€™Amore reached on a walk and single to start the inning.

Mike Giove then poked an RBI double, again to the right-center gap, for a 3-2 lead, and Vince Dastoli tacked on another run, hitting a single on a grounder to the edge of the infield, and Giove scored on an error.

â€śDuquetteâ€™s a good pitcher. We figured he was gonna throw against us,â€ť Berlin head coach Gary Van Etten said. â€śThey put it together and battled. These guys are battlers. They finished 20-2 in the state and lost the state championship by one run so theyâ€™re gonna battle.â€ť

Bristol (3-2) plated a run in the fifth on a hit and run, as Ryan Greene smacked an RBI double to deep left field to score Goulet, who had reached on a walk.

Bristolâ€™s comeback bid in the seventh was shut down by Mark Addamo, who relieved winning pitcher Camden Murphy by working around a leadoff walk drawn by Carson Sassu and a sacrifice bunt by Plantamuro.

A throwing error by Giove at third base kept the inning alive, but Addamo induced a flyout by Bristolâ€™s three-hole hitter Goulet with one out and runners on first and second. And Addamo struck out cleanup hitter Greene looking on a curveball on the inside corner of the plate to end the game.

â€śJagger pitched great tonight except for that one little slipup,â€ť Bristol head coach Jerry LaPenta said. â€śA couple balls found alleys. ... Berlinâ€™s a good team. I expected it to be a close game. Iâ€™m proud of the fact we fought back there.

â€śI like the fact we came back. I thought we played really well. We hit the ball hard, but theyâ€™re a very good team. Weâ€™ll be fighting with them the whole season.â€ť