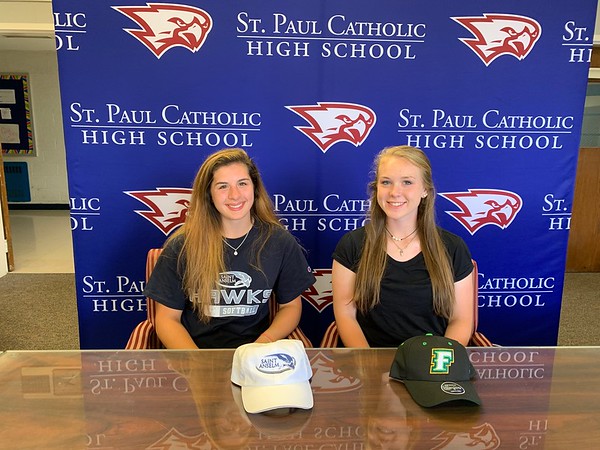 BRISTOL - When Jessica Persechino and Abby Poirot started their St. Paul careers four years ago, they weren’t enemies, per se, but they were certainly foes, having played for rival travel softball teams all the way through their eighth-grade years.

They played each other fairly regularly on the weekends, but besides that, they didn’t know much about each other, besides the fact they were both softball players and there was a mystery as to who was going to take the reins of the No. 1 pitcher’s spot after Alessandra Milardo eventually graduated.

“We didn’t like each other at all,” Poirot said. “The question was who was gonna pitch after Sange. That started a little fire between us.”

That all began to change during a freshman year study hall during their first semester as Falcons, as the two started to form a relationship. That bond became stronger during winter offseason workouts in Meriden, and the two eventually became best friends, nearly inseparable.

That friendship has featured several on-field rituals, inside jokes told through a mere glance at each other and, oh yeah, a whole lot of winning.

The two were at the forefront, says athletic director Dave Dennehy, of putting “St. Paul softball on the map,” having led the Falcons to a 37-9 overall record in 2018 and 2019 (excluding conference tournament games) and back-to-back Class S state tournament quarterfinal appearances when the pair were two of the program’s stars. That came after St. Paul reached the 2017 state title game when they were sophomores.

The two were able to put their differences aside rather quickly as freshmen to help eventually lead the Falcons as upperclassmen and now, four years after hating each other, the two are going out together, but headed in opposite directions.

Persechino is set to make the 2½-hour trip northeast to New Hampshire to continue her softball career for Saint Anselm College, while Poirot chose to go a little more than two hours southwest to play at Felician University in New Jersey.

Persechino will be joining one of the best Division II programs in the nation, which two years ago reached the NCAA Division II National Championship final and last season reached the Super Regional.

Though the Hawks graduate just one senior, shortstop Jordan O’Connor, it comes at Perschino’s position. She says some parents have told her she “has big shoes to fill” with O’Connor, which is “a little nerve-racking.” But Perschino will be ready to give it a shot, even if she admits she doesn’t like playing softball in the northeast cold.

“I think that’s the one thing I hate the most, is playing softball outside in the cold, and that’s what I’m gonna do,” Persechino said. “But I really love the school, in general, because it’s really pretty up there. When I did my overnight at the beginning of last fall, all the girls were so welcoming. I did a practice with them, and the coach was great. I just loved everything about the school.”

Poirot, meanwhile, isn’t just heading down a different path directionally. She is also joining a program vastly different from Saint Anselm’s, in that Felician is just beginning to get off the ground with its athletics program in its attempt to not only put a winning team together on the field, but also conduct renovations to its facilities.

“My school is pretty much building up a softball program,” Poirot said. “They’re rebuilding it, trying to make it stronger. A lot of my school’s athletics they’re trying to build up, and it’s actually building. They’re having more athletes come and are expanding the school a lot more.”

Before they leave for their respective programs, which could potentially meet up at Myrtle Beach in South Carolina during spring break next season, they were able to reflect on some of their favorite memories as Falcons.

One of the most unique of which was a handshake in which they each grab a handful of dirt in their right hand, knock gloves, tap fists and then smack each other’s backside with the dirt at the beginning of every inning.

What Perschino is going to miss the most, however, is when Poirot, “throws a strike, but the ump calls a ball, so you just turn around and smile at me.”

“And then I get yelled at by the umpire for smirking,” says Poirot, who said she will be sad to be without another important aspect of the game for a while.