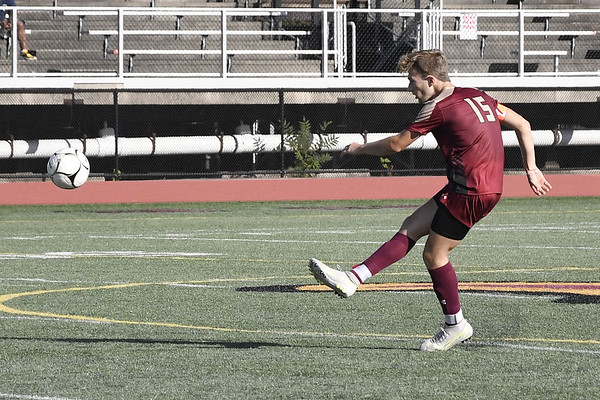 In the North Region, New Britain's Cameron Naples, Giovanni Peart and Max Szczepanik were selected. The Hurricanes earned the 25th seed in the Class LL state tournament with a 6-8 record, before falling to Darien in the first round. Stats for New Britain were unavailable at time of publication.

The Nor'easters also represented the North and saw Beckham Alderucci, Christian Amaral, Manassah Dalomba, Tyler Ferreira and Jason Welch chosen for all-conference. A 9-4-2 record gave Newington the No. 12 seed in Class LL, but it lost to Simsbury in the first round.

Amaral scored 11 goals while assisting 14, totaling 36 points – all of which were team-high. Ferreira scored four goals this season and finished with nine points, the third highest on the team. Dalomba had three goals with one assist and Alderucci had two goals with three assists. Welch had three scores, tying for Dalomba for the third highest on the team.

In the South Region, Berlin’s Zach Cancellieri, Adam Kozubal and Colby Nardelli were selected. The Redcoats used a late-season surge to grab the 15th seed in the Class L state tournament. Berlin lost 3-2 in the first round, but finished with a 9-4-3 regular-season record.

Stats for Berlin were unavailable at time of publication.

Ethan Crumrine, Beckett Hennessey, Mark Palma and Carson Rivoira represented Bristol Central in the South. The Rams were one of two area squads to win a game in the playoff, beating Wilton. The Rams then lost to Guilford in the second round.

Bristol Eastern did not make the postseason for the first time since 2-16 with a 4-11-1 record but saw Adam Borry and Dom Femiak receive all-conference selections. The Lancers were the top seed two years ago in Class L.

The season stats for the Lancers were unavailable at time of publication.

Southington is the only team in the West Region and Ryan Lunn and Liam Schroeder rounded out the local all-conference picks. The Blue Knights clawed their way into the Class LL postseason but lost to eventual state champion Farmington in the first round.

The Blue Knights finished 4-10-2. Stats for the team were unavailable at time of publication.