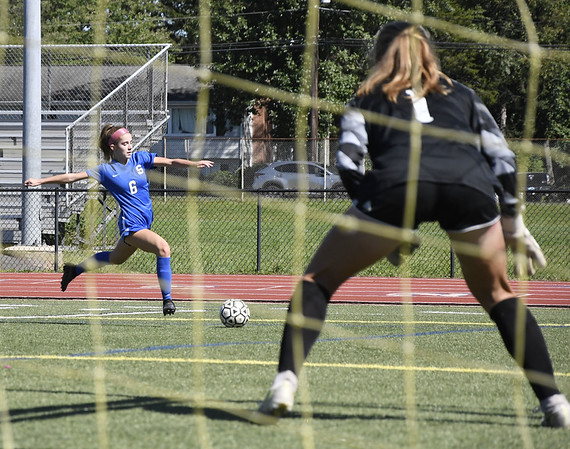 SOUTHINGTON - The success of Southington girls soccer will continue into this season with Mike Linehan at the helm of the program.

But, as the saying goes, Rome wasn't built in a day.

After a 2-1 loss to Glastonbury Saturday afternoon, the team that knocked off Southington in the Class LL state final in 2019, the Blue Knights are going back into practice this week with lessons learned.

Linehan gave credit to Glastonbury, who he knew would make for a good opponent on Saturday, and pointed to hanging with them through the contest with a young team that has nothing to hang their head at just five games into the 2021 season.

"It's the fifth game of the year. We're going to get 11 more," said Linehan. "... We're going to get better, and this is a group where [on] the entire team I don't have a starting player that returned [from last season]. When you take what we had and rebuild and bring everybody in, ... we're going to be better tomorrow because of today and what we learned (Saturday)."

The Blue Knights got on the board first, getting a score in the fifth minute by Nina Muir, but allowed a penalty kick score just before halftime in the 40th minute and a score in the 62nd minute in the second half.

The Blue Knights seemed to noticeably be worn out in the back end of each half, but didn't back down from trying to find an equalizer. A push in the final two minutes allowed Southington to take a free kick just outside the box, but the attempt sailed wide.

Adjustments after halftime were limited as Linehan didn't want to throw too many changes in formations. An adjustment going to 4-4-2 in the second half was "fumbled" said Linehan, who said the team is still learning and finding out what they can do.

"Last year I was able to make those quick adjustments due to what I call the 'soccer IQ on the field,'" said Linehan. "... This team, we're working on it at practice, [doing] the adjustments we need to make so we're not fixed on one position and they can play more and adjust better. That's the learning process. ... Right now, with a young group, we're still finding out.

Linehan knows the need to be able to adjust on the fly and late in games is imperative, especially with better teams coming up on the schedule. Saturday's loss is the first of three games against Glastonbury this season.

"We've got to be better at that with better teams going forward," said Linehan. "The next time we play Glastonbury, if I'm not in a situation where I can make that adjustment, shame on me. We've got to be able to make those adjustments."

Coming up on the schedule for Southington is Hall (on Tuesday), Wethersfield (on Friday), RHAM (Oct. 5) and South Windsor (Oct. 8). The schedule doesn't get easier, and Linehan is taking the challenge head on.

"Tuesday is Hall, Friday is Weathersfield, ... it keeps coming and coming. As the competitor I am, I said to the ladies that I don't complain about it, I smile about it," said Linehan. "Why would I not want to come to every game knowing I have to compete, this is not a layup. ... When we get to the (state) tournament, we're going to be battle tested. We certainly should."