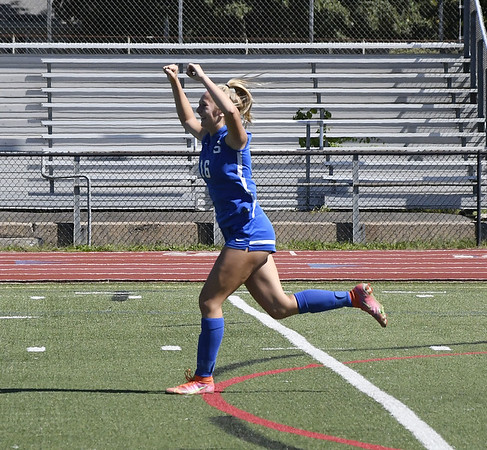 A Gianna Angelillo score in the 62nd minute for the Warriors broke a 1-1 tie, putting Glastonbury ahead after missing wide on a penalty kick in the 53rd minute.

A tight contest from start to finish saw Glastonbury struggle to break through Southington’s back line for much of the first half. A 40th minute penalty kick score from Emily Smith sent the game into intermission locked at 1-1, matching Southington’s Nina Muir after she scored on a chip shot in the 5th minute.

For Southington head coach Mike Linehan, he was expecting a strong opponent. Glastonbury was the winner in the 2019 Class LL final against Southington, winning 1-0. It was the last time each side played one another.

“(The scouting report) was what we expected. They’re deep,” said Linehan. “I think he does nice job of rotating his players in. … If you look at the matches, they wear down teams. Many coaches that I’ve spoken to say it’s the second half of each half [that will win you the game], and look what they did. The second half of the first half, they dominated possession and we got tired. We’re not as deep. No surprises.”

Glastonbury poured shots on net in the second half as their chances in the attacking third increased. Southington, trying to keep up, could only clear the ball away and hope to connect on through balls when trying to break out on offense.

“Nobody really broke each other down,” said Linehan. “They got through there at the end, a nice little combination. We’re a better team (than we showed) in our final third.”

Southington’s second wind of energy came in the final five minutes of action as they ramped up the pressure in trying to get the ball downfield. A free kick from Claire O’Neill from just outside the box sailed over everyone in the 78th minute, all but closing the book on the Blue Knights’ day.

Glastonbury dribbled out the clock to close the book on the afternoon with 12 shots on goal, 10 of which were stopped by Southington’s sophomore keeper Margaret Miller. Southington ended with seven shots on goal.

After the contest Linehan spoke to his girls with emotion and passion on wiping the slate clean and looking inward on how they can improve after facing quality competition.

“I told the girls, ‘we can always in life, when you have adversity, you can always blame others. Can always deflect.’ I think we needed to look at, right now, where we are, and from a player perspective look at what they can do so the next time we play them we can be better,” Linehan said.

Looking forward to the next match at Hall on Tuesday (6:30 p.m. kick), Linehan is going back to the film to see where he and his girls can improve and work towards being a deeper, well-rounded club.

“We as coaches need to do a better job of rotating our players,” said Linehan. “We have to be able to play more than 11, 12 or 13. Teams like (Glastonbury) are deeper and we’re going to be have to able to compete more as a team. …. We’re going to have to adjust. … We’ve got to look where maybe we have a better opportunity to be successful and maybe that’ll be looking at more weak side than our strong side. I’m going to look at the tape and make some assessments there.”

Tallying assists in the contest was Julia Rusiecki for Southington on Muir’s score. Gisele Astiasarah had the assist in the game-winning goal by Angelillo for Glastonbury.