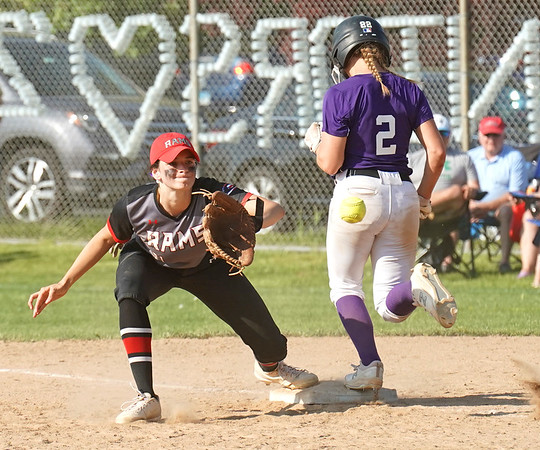 Southington's Alison Rembish, right, reaches base on an infield single during Thursday's game. | Dan Heary Buy this photo
Published on Friday, 21 May 2021 17:56
Written by Ryan Ames

SOUTHINGTON – The bottom of the Blue Knights softball lineup came up clutch in its 3-2 win over Cheshire on Thursday.

Its number eight hitter, Alison Rembish, led Southington with a pair of hits against the Rams, while Madelyn Napierski, the number nine hitter, came through with the game-winning RBI during the bottom of the seventh with a shallow single to left field.

The victory highlighted yet another strength of the Blue Knights this season as their depth in the batter’s box is only getting better.

“I was really proud of our girls,” Southington coach Davina Hernandez said. “I was most proud about the total team effort. The big baserunners, the clutch bunts, hits, came from all parts of the lineup, the top of the order, the middle of the order, the bottom of the order.”

Rembish recorded the Blue Knights’ first hit of the game with a sharp single to right field during the third inning off Cheshire pitcher Brianna Pearson. Up until that point, Southington had just one baserunner through its first seven batters.

“If anybody was going to take it down the right field line, it was going to be her,” Hernandez said. “She’s worked really hard, she’s been staying after practice, working on her hitting.”

“Ali’s been on fire,” Hernandez said. “She’s been our two hitter, our nine hitter, she has great speed, she can bunt and she can hit. I love moving her around in the lineup. She’s really been one of those players that allows us to make things happen in a tight game, whether it’s dropping a bunt, getting a steal, driving the ball, she’s done a great job of going with the pitch.”

Napierski’s heroics capped off a productice afternoon as well, as the junior made contact in each of her three at-bats during the contest.

“Me and Ali definitely know our worth, even though we’re at the bottom of the lineup,” Napierski said. “That doesn’t really mean anything. Our whole team works together as one and that’s the end of it.”

While the top half of Southington’s order struggled to make contact off Pearson, they forced the Rams pitcher to throw strikes all game long.

“I was very pleased with our discipline at the plate, with a pitcher like Pearson, if you have poor discipline, she will eat you up,” Hernandez said. “Discipline, I felt like gave us an opportunity to stay in the game and battle with them the whole way.”

Luckily for the Blue Knights, Rembish and Napierski caught fire in the biggest game of the season thus far.

“We all expected them to put up a good fight because has always been a good standalone team with us,” Napierski said. “We’ve always had challenges with them, but I think our stamina and our excitement and wanting to win so badly and wanting to be a team together really came through today during the game.”

Southington will head to Northwest Catholic next on Monday, May 24 at 3:45 p.m.