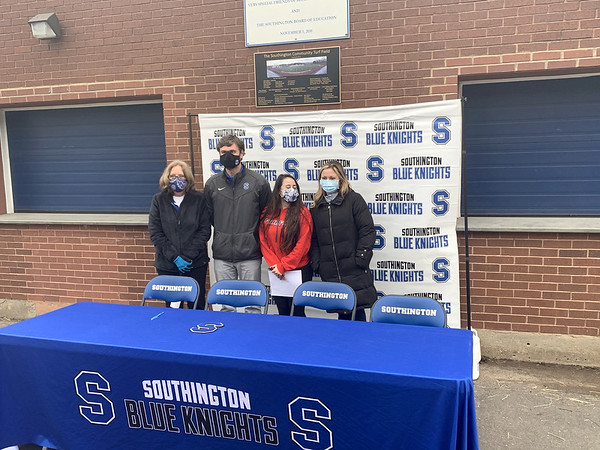 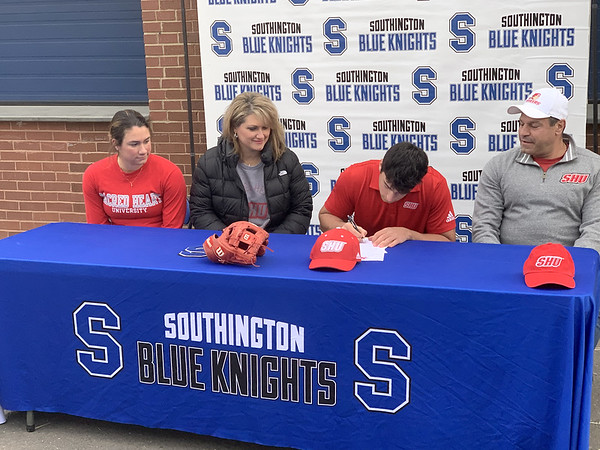 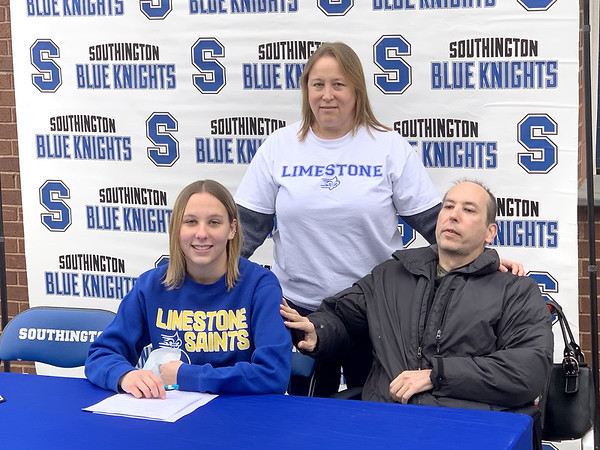 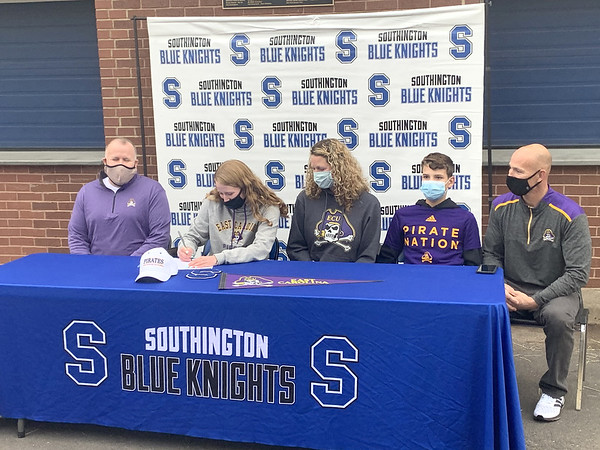 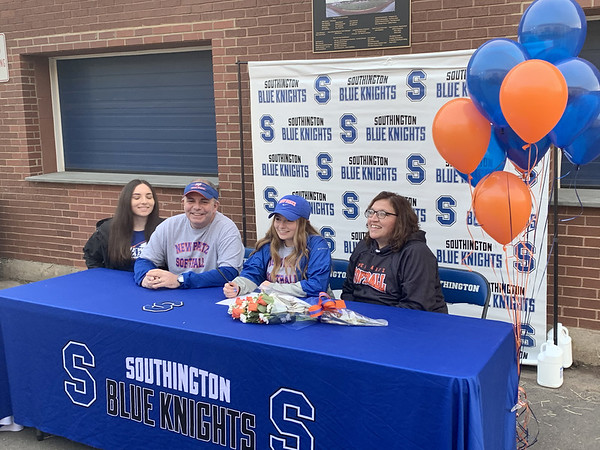 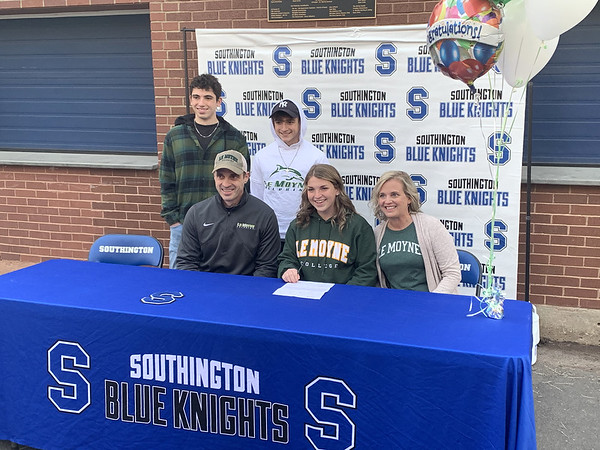 SOUTHINGTON - Southington High School continues to do everything it can to celebrate its student-athletes as they navigate a time that has not always been conducive to playing sports.

While the sports landscape going forward remains unclear at all levels, nine Southington seniors finalized their commitments to continue their athletic careers in college on Tuesday. The athletes represented five different sports and included five students who will be competing at the Division I level.

The swimming and diving team opened the event and Hammarlund and Beaulieu led off as the first two Division I signees. After four strong years with the Blue Knights that ended with a dominant season against the other local teams, Hammarlund will move on to the pool at Sacred Heart University.

“The feeling is so great. It’s almost a relief that I don’t have to worry about anymore,” Hammarlund said. “I’m going to keep pushing and keep trying even harder throughout the rest of my season so that I can be the best I can be for them.”

After completing the year as a part of what head coach Evan Tuttle called arguably the most talented girls swimming and diving team in school history, Beaulieu’s next step will be at Fairfield University. While trying not to look too far ahead, she is already excited about the prospect of having a complete senior season when she finishes up in four years from now.

“I’m really glad that I’m going to be able to continue diving for the next four years and maybe get a more normal senior season in a few years,” Beaulieu said.

Another integral part of the swim team’s success, Noyes will be fulfilling more than one goal when she begins her time at Keene State in New Hampshire next year.

“I’ve wanted to swim in college pretty much since I was eight years old,” Noyes said. “Especially since I was accepted to Keene State, I’ve been wanting to go there since I was a little girl because my mom went there. To reach that goal was a huge accomplishment and it was just mind-blowing for me to reach that point.”

Also a member of the diving team, Perrotti will continue her stellar gymnastics career in Gaffney, South Carolina at Division-II Limestone University. Exclusively competing for her club team prior to last year, she is looking forward to taking the next step in her career even as she’s hoping to potentially participating in one more high school season.

“I’m excited and it’s important that we signed,” Perrotti said. “I’m just excited to do it for four more years.”

Sowa closed out her high school soccer career Friday evening by winning the CCC Region B postseason to complete an undefeated season and less than a week later, solidified her decision to play Division I at East Carolina University in Greenville, North Carolina. She received All-State and All-New England honors last year and will look to continue receiving such high recognition at the next level.

She was recruited by several Division I programs, but ECU was her top choice.

“I think it was the big sports atmosphere,” Sowa said. “Walking in there, I saw the big campus, it’s a big school, over 20,000 students. Just being able to be an athlete there is exciting. I think overall the academics are good, they have a lot to choose from.”

Both Bade and Damore are moving on to play on Division I baseball fields despite losing their entire junior seasons. Teammates on the same showcase team, they were excited to share this moment together as Bade declared to play shortstop at Binghamton University and Damore will be pitching and playing third base at Sacred Heart.

“It’s one of the best days of my life,” Bade said. “The day I had that call with Binghamton and said I’m going there was one of the greatest days, but to actually make it official today, it’s a great day. I talked to my head coach and assistant coach at Binghamton today and they were just congratulating me again. I can’t wait to go there.”

Damore will be studying finance at Sacred Heart in addition to playing baseball. He said he is looking forward to suiting up for the Blue Knights for the first time in more than a year, but is even more excited to have more baseball in front of him after that.

“It’s been a lifelong goal of mine to play Division I and so to finally accomplish that today is an amazing feeling,” Damore said. “Especially to do it here with Devan. We’ve been really good friends since we were little, so it’s awesome to do that today with him.”

Even if they never get to play high school softball again, Panarella and Greco will already be able to leave high school as state champions, giving them strong experience as they move on to the next level. Growing immensely since leaving the circle of the 2019 state championship, Panarella will be pitching for Division-II Le Moyne College in Syracuse, New York next year. She said the school was her first choice from the moment she set her eyes on it.

“I went to the school, and just the campus, I could see myself going to college there,” Panarella said. “They’re education program is very highly ranked. I really liked the program and then I met the coach and she was great. Off the bat I knew we had chemistry and I knew I’d like to play there.”

Making an impact from her freshman year, Greco’s next step in her softball career will be at SUNY New Paltz, a Division-III school.

“I am so beyond excited because I’ve been playing this sport since I was four,” Greco said. That’s 14 years I’ve dedicated my life to this sport.”

With the coronavirus pandemic causing major interference with everyone’s athletic seasons, everyone is pleased they have more time to compete at the next level.

“This season was a shock to all of us,'' Hammarlund said. “It was really unfortunate and we made the best of it, and I’m just really excited I get four more years of it.”