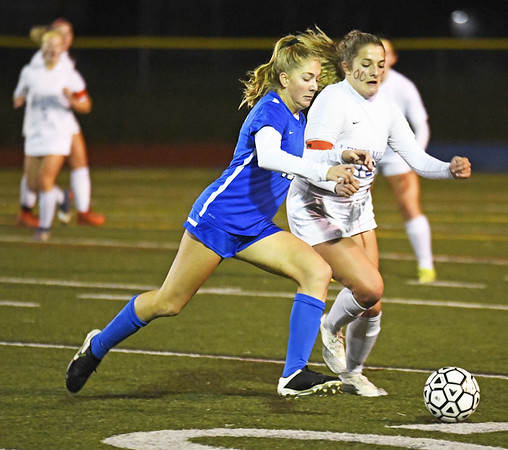 SOUTHINGTON - Shannon Litchfield put a stamp on the Southington girls soccer team’s undefeated 2020 campaign with an assertive 6-0 win over Lewis Mills in the final of the CCC Region B postseason.

Litchfield finished with four goals in the match, highlighted by three in the second half and two in the final five minutes. The 1-0 lead Litchfield gave the Blue Knights before halftime was all they were going to need, but they added five more after halftime from Morgan Hubert, Litchfield and Alison Carr.

“It was a great way to end,” Litchfield said. “We just really wanted to end on a happy note, and I think we really accomplished that. Especially with this team, we’ve been together for so long, since I think fourth grade, so to finish all together is awesome.”

The match was a product of how each team’s defensive line played. While the Spartans’ defense was porous and struggled to get the ball to their offensive players, the Blue Knights’ defenders showed complete composure when engaged. They limited the time of each Lewis Mills possession and moved the ball back into the midfield en route to goalkeeper Emily Eigo’s 10th clean sheet of the season.

“They played amazing, they saved my butt,” Eigo said.

Litchfield was the one to break through first with a goal for the Blue Knights when she beat the Lewis Mills back line on a run and put the ball past the goalkeeper with ease. Litchfield’s goal was a culmination of consistent pressure on the Spartans’ defenders who the Blue Knights were able to beat for multiple quality chances prior to scoring. She nearly netted a second goal early in the second half, but pushed it left.

“That’s a kid that last year broke her tibia and fibula at the Farmington game and did not have an opportunity to experience the tournament run that we made,” coach Mike Linehan said. “For her to finish her season like this, being on the field like that and recovering from that type of injury is outstanding I’m so happy for her.”

Southington struck again in the 50th minute of the match when Macaela Potamis eluded a Lewis Mills defender and wrapped a pass around the opposing player to Morgan Hubert on the right side. Hubert rifled a deep shot from outside the box up and into the goal to double her team’s lead.

“That was a big goal because knowing Lewis Mills as they are, they countered extremely well,” Linehan said. “If they had gotten one and made it a tie game, it would have certainly been a different type of game.”

Litchfield refused to be held quiet for the remainder of the contest and weaved through three Lewis Mills players before sending a shot off her left foot across the goal and in. Alison Carr broke free to add to the offensive downpour before Litchfield worsened the blow with two more at the end.

“I think we just composed ourselves,” Litchfield said. “A lot of the time, we get frustrated and we freak out a little bit, so we were able to compose ourselves, just play the ball around and I think that’s how we ended up scoring.”

With the season now over, everyone looks ahead to next year when they hope they’ll be playing soccer again under conditions they’re more used to.

“This feels just as good, obviously this is not the state championship we wanted, but it’s something,” Litchfield said. “I think we worked hard this season and it definitely set the [level] for next year for them to come back and finish it.”