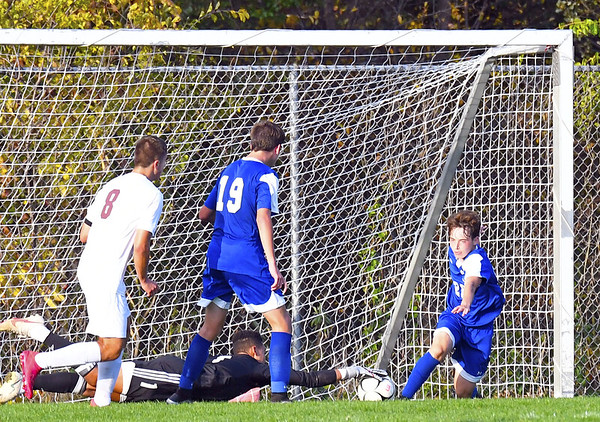 The Connecticut Interscholastic Athletic Conference will not be hosting state tournaments this season due to the covid-19 pandemic, leaving individual conferences and leagues to develop their own postseason formats.

The Central Connecticut Conference sent out its playoff plan to member schools, and aside from cross country, which is still being put together, all other fall sports have a concrete plan for postseason competition, which will begin on Nov. 9, two days after the final regular season contests.

For boys and girls soccer, the postseason tournaments will be separated by regions, which will be split up into two different tournaments based on seeding. Most regions within the CCC have eight teams, meaning the top four seeds in each region will take place in a two-game tournament, while the fifth through eighth seeds will do the same.

The first round, or semifinal round, for those tournaments will take place through Nov. 9 and Nov. 10, while the final rounds will happen on Nov. 12 and Nov. 13.

The top seed will play the fourth seed in the top tournament, and the fifth will open up against the eighth in the other bracket. The two winners will play each other in the next round, the championship round, while the two losers will also play each other, giving each team a guaranteed two games for postseason play.

For example, in Region B of the CCC boys soccer standings, Farmington is currently the top seed, with Plainville and Bristol Eastern as the second and third seeds, respectively. The Blue Devils would play the Lancers in the first round of the top-half tournament, and the winner would play the winner of Farmington and Avon, currently the fourth seed, in the final. The fifth seed is Southington and the eighth seed is New Britain, meaning the Blue Knights and the Hurricanes would meet in the first round of the second bracket.

Each game will be played at the higher seeded team’s home venue, unless another site is agreed upon by both athletic directors.

The seeds are determined by winning percentage, as is also the case for girls volleyball and field hockey. Volleyball will have the same format as soccer, with the bulk of local teams being slotted in Region B. Bristol Eastern looks to be a lock at the top seed with its current 8-0 record, and would take on Farmington in the first round if the season ended today. In the 5-8 bracket, Southington would take on Plainville in the opening round, and New Britain would face Lewis Mills, though there is still nearly two weeks of play left.

For swimming, the postseason will consist of four meets within each region spanning from Nov. 9 to Nov. 12. Meets will be either in person or virtual, and the final times for all teams will be submitted to each region chair by Nov. 13.

The same format will be held for diving, which can either be in person or virtual.

Elsewhere, the CRAL has also set up postseason experiences for its schools, which also includes Goodwin Tech this season after the Connecticut Technical Conference disbanded for the year due to regionalized scheduling being implemented to mitigate the potential spread of covid-19. For girls volleyball, the CRAL currently has a nine-team postseason planned, with the eighth and ninth seeds competing in a play-in game on Nov. 9 before the following rounds will be played on Nov. 10, 12 and 16. Currently, Innovation and Goodwin Tech are both safely in the top five and will likely avoid the play-in game.

The boys soccer tournament will also have nine teams and use the same format, while the girls soccer bracket will have six teams, with the top two seeds getting a bye. The conference’s cross country meet will take place on Nov. 10 at Elizabeth Park in West Hartford.

CRAL commissioner Jonathan Winer confirmed on Tuesday that Vinal Tech and Classical Magnet have already opted out of postseason play, and if any other teams decide to do the same, the postseason formats will be adjusted.