'If they're allowing summer leagues and AAU teams to play, why can't we have high school sports?': Southington quarterback Brady Lafferty talks of the importance of the student-athlete rally he organized 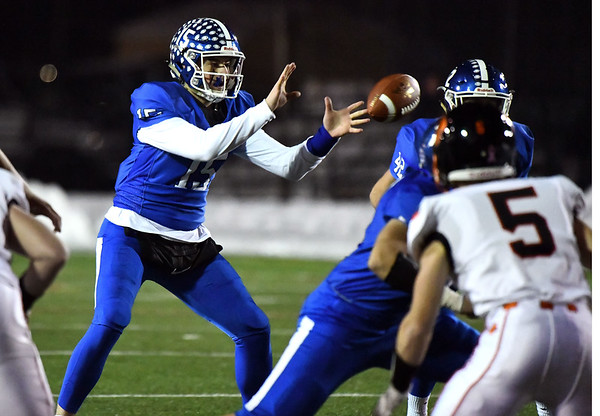 SOUTHINGTON — As the CIAC announced its plans to continue with high school sports in the fall amid the coronavirus pandemic last Wednesday only to put them back on hold two days later, Brady Lafferty grew increasingly frustrated.

“Was there going to be a season or not?” he asked.

It was an answer many across the state have been wondering over the past week as the Department of Public Health released a statement recommending against playing football and volleyball in the fall, as well as postponing the start of any interscholastic sport activities until at least two weeks after schools begin in-person learning again.

While sports effectively remained in limbo, one thing Lafferty, the senior quarterback for the Southington football team, knew he wanted to make sure of was the athletes who would be playing this fall had their input. So after talking it over with teammates Ryan Andrews and Donell Mackey-Woodson, and his head coach Mike Drury, Lafferty took to Twitter at 3:08 p.m. on Monday to take action and get something organized.

“Us athletes need to unite together, and have our voices heard. We plan to organize a protest @ the CIAC headquarters on Thursday, 8/20 @ 10:00 A.M. Please spread the word and come to show your support in protest of resuming the preparation of a hopeful upcoming season! #WearAMask,” the tweet read.

“We’ve been doing everything they’ve being asked us to do,” Lafferty told The Herald about the reason for organizing the rally in Cheshire. “Wear a mask inside the field. We’ve brought the weights outside and cleaned them down after each session. It’s been difficult and definitely a process. We want a season. I feel like we have the numbers [across the state compared to others in the country]. If they’re allowing summer leagues and AAU teams to play, why can’t we have high school sports, especially if it’s regionalized?”

That’s been perhaps one of the main points the athletes and coaches are trying to make. Under Gov. Ned Lamont’s reopening plan, sports and fitness facilities were allowed to reopen on June 17, including youth sports. The New Britain Bees, a team in the Futures Collegiate Baseball League, began playing on games on July 2 and has played games in Massachusetts and New Hampshire.

“You look at other states forging ahead and it’s hard,” Drury told The Herald. “There’s a risk, but there’s a risk in any type of sport. You look around the nation and no state is doing better than us in terms of [covid-19] data… There’s hard decisions to be made, but we want the best decision to be made in the best interest of the kids. If you’re going to allow teams to play inter-state tournaments, indoor and outdoor and with fans, it’s hard to single out one sport or two sports. We’re controllable. You look at summer leagues and AAU teams, they’re not in controlled environments and can travel but can still play. I get that’s more of the Department of Public Health than the CIAC, but that’s where a lot of the frustration is coming from.”

“You do deserve to be heard,” replied Daniel Hand head football coach Steve Filippone. “Thanks for having the courage to take a stand. Make sure everyone wears a mask and social distances or they may use it against us.”

“It’s time to take a stand!” Andrews, Lafferty’s teammate, quoted. “We need everyone we can from every sport, level, and grade there. We want to play!”

“Let our voices be heard in a responsible manner!..” Valley Regional football player Colbe Andrews said. “[L]et’s show them that we can do it!! #WearAMask.”

The reaction took Lafferty a bit by surprise at first.

Lafferty said he knows a few football teams are going to show up at the rally, as well as a number of soccer and volleyball teams from around the area. He’s also heard from athletes at schools in Fairfield County.

“It’s about the kids wanting to be heard,” Drury said. “I thought it was great. Let’s allow them to be heard, go there and talk. I know [CIAC Executive Director] Glenn Lungarini has been great responding to that and open to listening to the kids. He knows they’ve been through a lot.

“I think it’s important these guys are able to voice themselves. I think it’s the right thing. Our guys are going to be there and when Brady came to me and asked me [about the tweet] I told him I thought it was the right thing to do. That’s what this country is, allowing you to voice your opinion. These are tough times and we get it, but there are a lot of kids who are riding on this stuff. There’s a lot they put into it.”