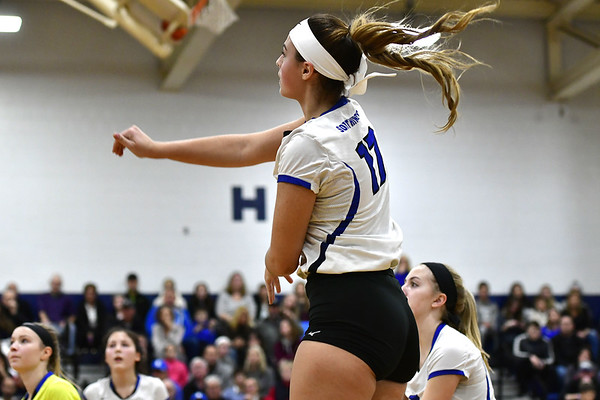 NEWINGTON - The Southington girls volleyball team lost convincingly to Newington two weeks ago in a 3-0 sweep, but in Monday night’s Class LL state tournament opener, the Blue Knights brought along a serving attack that made them look like a completely different group.

“Our serve receive killed us,” Newington head coach Chris Wanner said. “We made unforced error after unforced error, and we got into a hole with it.”

The Indians’ hole was dug almost immediately when the Blue Knights jumped out to an 8-3 lead in the first set thanks to senior Katherine Grunderson, who threw down a kill before sending over three straight service aces. She thought she had four in a row when her serve landed just past the back line, giving service back to the Indians, who responded with kills from Emilia Dugas, Sara Caceres and Amaia Jackson on three straight volleys to pull within 8-7.

Southington kept its lead thanks to more efficiency from the service line, this time getting three straight unreturned serves from senior Brooke Cooney to help the Blue Knights on an 8-2 run, taking a 16-9 lead and forcing a timeout from Newington.

The Blue Knights maintained their seven-point advantage through 20-13 with a little help from a pair of service errors by the Indians, who couldn’t draw any closer than six the rest of the way in a 25-15 loss. Southington closed the opening set with two kills from Cooney and fittingly another service ace, this time from Katherine D’Agostino.

“We were motivated to do our best from the beginning,” Southington junior Veronika Gorski said. “We were ecstatic with that start and we just wanted to continue it through the rest of the game.”

Newington tried to grab momentum at the start of the second set, but was stopped by Gorski, who smacked home a pair of kills and recorded a big block up front to keep the set even at 5-5. The Indians responded with three straight to take the lead, and after a kill attempt by Maddie Massaro-Cook fell just wide, the junior made up for it with a booming kill and a block to put Newington ahead 10-6.

Serve receiving bit the Indians again after taking a four-point lead, this time unable to return back-to-back serves from Southington’s Mackenzie Coppola to help the Blue Knights pull even at 12-12. The Indians took back control behind senior Jola Bufi, whose kill and service ace helped give the team a 19-15 advantage.

The Blue Knights fought back to 20-19, but a Caceres service ace and a kill from Cook brought Newington’s lead to 23-19, and the Indians closed it out to even the match.

Cooney’s fourth service ace of the match helped Southington take a 10-6 lead in the third set, prompting a timeout from Wanner. Cooney sent over another pair of aces out of the timeout to make it 13-6, and two more unreturned serves stretched the Blue Knights lead to 18-9. They sealed the set win with a kill by Rachel Possidento and moved to within one set of the upset thanks to more serving success the Indians couldn’t handle.

“It’s something we always struggle with against really good teams,” Caceres said. “It’s a mental thing, because when we work on it at practice, we’re amazing.”

Looking to fight off elimination, Newington opened the fourth set by grabbing a 5-1 advantage thanks to a kill from Caceres and two straight service aces from Bufi. But Southington answered with six in a row to quickly take the lead. Two straight serves from Possidento that went unreturned later helped stretch the lead to 16-10, and another two in a row from Era Pasha made it 22-16, as the relentless serving attack helped the Blue Knights finish off the upset and advance to meet No. 7 Fairfield Ludlowe on Thursday at 6 p.m.

“We wanted to serve the seams and I think early in the third set, we started doing a really good job of that,” Southington head coach Richard Heitz said. “I think once they realized if we can get them out of system we could generate some free balls and the rest would take care of itself.”