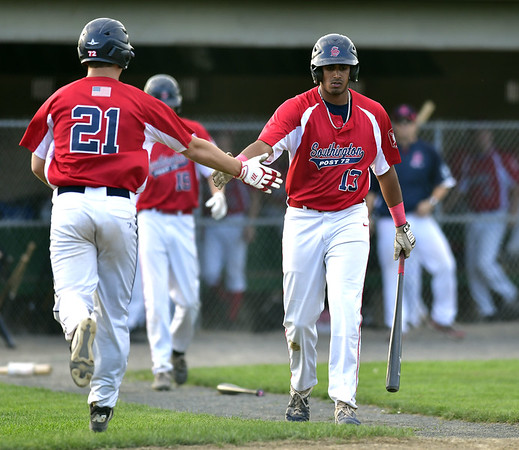 SOUTH WINDSOR - Having grinded out a win over Waterford just three days ago, Marc Verderame had a good feeling his club would be in for a battle in Tuesday night’s state tournament game rematch.

That’s precisely what the Southington American Legion manager got in his team’s 5-2 victory at Rotary Field that advanced it past the South Windsor Super Regional and into this weekend’s best-of-three championship series in Meriden against Stamford.

“As the innings went on, we knew it was gonna be a close game,” Verderame said. “They battled. We battled. [Starting pitcher Ryan Henderson] didn’t have his best stuff. We walked seven guys tonight and that’s not good. We’re lucky to get out of this one alive, but we fought under pressure.”

Having built a 2-0 lead on a bases-loaded walk in the first inning and an RBI single from Sean Crean to score Ethan McDonough, who had floated a double moments earlier, in the second, Southington looked like it would be on cruise control the rest of the game.

That’s because Henderson, the team’s No. 1 pitcher, had been dominating Waterford hitters on outside-corner fastballs, offspeed whiffs tailing away from right-handed hitters and curveballs diving inside and under lefty bats.

Despite racking up five strikeouts, however, he had also surrendered four walks through 3 ⅔ innings on 82 pitches and was pulled with runners on first and second in the fourth.

“We call him ‘The Vulture,’” Verderame said of the reliever. “He’s always there ready to take it. He really set the pace there in those middle innings. I’m proud of that kid.”

Verrilli pitched three shutout innings in relief, but in the sixth he ran into trouble by loading the bases with two outs in a 3-1 game.

Jeremy Mercier then entered the game and two pitches later, he induced an inning-ending flyout to set down Waterford’s final threat.

Southington added insurance runs on Kyle Leifert’s RBI double and Brandon Kohl’s RBI single, and Mercier worked around a teammate’s error, one-run score and stranded runners at the corners in a victory that eliminates Waterford (23-9) and advances Southington (23-7) to its second straight state title series.

“We had to put the pressure on and keep scoring. That’s very important in these kinds of games,” Verderame said. “That’s a very good team over there. They kept getting opportunities. They had second and third and a chance to tie the game or take the lead, and we got out of it.

Southington will now face Stamford Friday and Saturday at Ceppa Field in Meriden for a shot at capturing its second consecutive state championship after winning the crown last season, the program’s first state title since 1993.

“I knew this group, we took a couple tough losses, but I knew we could get back,” Verderame said. “We got the squad. These kids are awesome.”