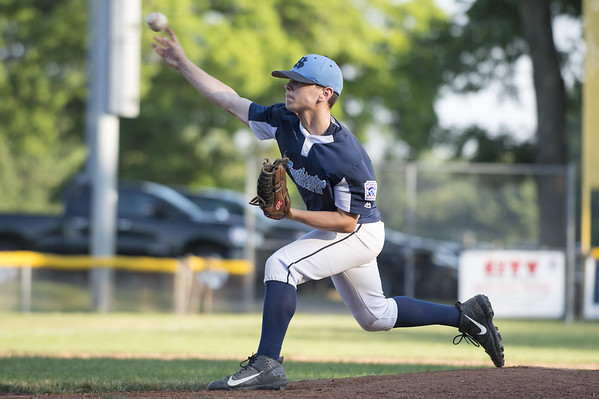 SOUTHINGTON - Southington North staved off elimination in the Little League Baseball District 5 tournament with a 4-3 win, ending Foresville’s season on Monday at Recreation Park in Southington.

Leading the way was Southington North starting pitcher Aiden Halpin, who threw 5⅔ innings to lead the club to a matchup with Southington South at 5:45 p.m. on Tuesday in Berlin, in an elimination game for both teams.

“It feels good. It’s exciting,” Halpin said. “I was just throwing strikes, letting them hit it and letting my defense take care of it. I just wanna win. That’s all I want.”

“A couple passed ball and a couple wild pitches and just mental mistakes [cost us],” Forestville head coach Corey Simard said. “You’ve gotta give it to [Halpin]. He kept us off balance, and they made some great plays.”

Lopez got the game out to an explosive start at the plate with a solo home run, his third bomb of the tournament, drilled to left field in the top of the first.

Southington North center fielder Caiden Watson’s diving catch, however, ended a threat with runners on first and second, and Watson quickly helped give his team a lead it would not relinquish.

The club was able to withstand the quick punch from Lopez by taking a 2-1 advantage in the bottom of the first, as Sawyer Gravel and Watson scored on a passed ball and an error.

“That’s the caliber [of kids] we have,” Southington North head coach Ed Roderick said. “Our kids play very loose. They’re very loose inside the dugout. It’s a really good group. What stops these kids is themselves. It’s 90 percent mental for them. They have the talent, and they’re very athletic. They just need to stay within themselves.”

Southington North added to its lead in the second on a wild pitch, and another run scored on an error for a 4-1 cushion.

Lopez helped Forestville cut into the deficit with a first-pitch leadoff double on a line drive to right-center to start the third. He was then brought home on a floating single up the middle by Matt Brelsford.

But with one out and runners on second and third, starting pitcher Halpin fired a strikeout, and second baseman Dante LaRosa snagged a ball on a liner to end the inning.

After Derek Chiulli led off the bottom of the third by drawing a walk and eventually advanced to third, Lopez threw a strikeout to end the frame.

Watson’s single up the middle helped put runners on second and third in the fourth, but Johnson got out of the jam, inducing a sinking liner snagged by Dante DePass at second base.

Lopez’s leadoff single in the fifth preceded Caleb Simard reaching first on an error. Lopez scored on an infield error, but Halpin kept it a 4-3 lead with two strikeouts.

After Johnson got out of another jam with runners on the corners by racking up another strikeout, Forestville was down to its final chance. Halpin, however, recorded two outs before reliever Colin LaRosa allowed two walks - the second an intentional walk to Lopez - and got the final out on a long fly ball by Simard to center.

“Aiden’s been stinging the ball most of the tournament, and that’s why they intentionally walked him, which was a smart coaching move,” Corey Simard said. “My son missed it. He just missed it. He’s got the power to the warning track, but he just got under it a bit and just missed it. What are you gonna do?

“This is the first time Forestville’s been in the crossover games in four years. To go 6-0 in pool play, but then going 0-2 in this just hurts. We’re a better team than that.”