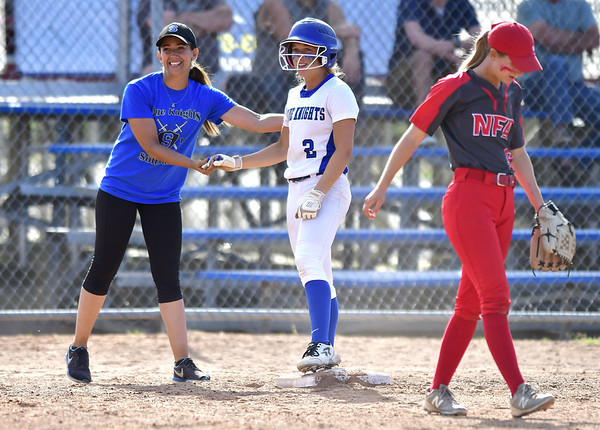 STRATFORD - There were moments this season when Southington softball head coach Davina Hernandez had to turn to her assistants and ask if she was being too tough on her players.

After suffering a crushing one-run loss in the 2017 Class LL state title game, Hernandez says she was hard on her girls in 2018. But when the Blue Knights dropped another brutal heartbreaker in last year’s semifinals by the same margin, she admits she came back and pushed them even more.

The main reason for some of the extra harshness? She believed the loss to Amity in the semifinals, in which Southington surrendered a 5-1 seventh-inning lead in a 6-5 loss, could largely be attributed to her team’s lack of discipline.

Amity’s discipline in the field and at the plate had grown stronger as the game wore on, while Southington’s got worse. Her girls started chasing pitches, and Amity stayed patient, composed.

So from the first day of spring tryouts, Hernandez set the tone. She wasn’t going to go easy on them. She continually hammered her main philosophy into them, putting a “humongous emphasis on discipline at the plate and focusing on fundamentals.”

In many practices this season, Hernandez would tell her girls to “drop your gloves and get to the poles,” making them run to the outfield foul poles as punishment for not showing self-control at the plate or having communication breakdowns on defense.

“If they didn’t do the little things, they would run,” Hernandez said. “We’ve just tried to really not allow the things that beat us in the past to beat us again.”

Third baseman Abby Lamson remembered what those first few days were like, and on Friday she reminded Hernandez.

“Those early tryouts were especially hard because she wanted everyone to know what our goal was from the get-go,” Lamson said.

The goal was to get back to the state championship and win the program’s 18th title. With the new approach in 2019, Hernandez was hoping it would serve as the difference between careers ending with smiles and careers ending with tears and hanging heads.

“She wasn’t a new coach, but she was a different type of coach,” shortstop Chrissy Marotto said. “She went with a new mentality. She wanted us to not make the same mistakes we made in the past, and she just wanted to make that clear. So she was hard on us, and I think that was the best thing she could’ve done.”

Added Lamson, “She was really hard on us, but she wasn’t always mean. She would just stay on you to get it in your mind that, ‘You can do this. You’ve got this. You just have to believe.’ That was big for us.”

Marotto and Lamson, both seniors, were critical pieces on both the 2017 and 2018 teams and suffered through those tough losses. But their approving comments on Hernandez’s 2019 switchup came nearly a year after last season’s heartbreak when, on a beautiful, picture-perfect Saturday afternoon at DeLuca Field, the Blue Knights got their redemption with a 7-6 win over NFA for the Class LL state title.

Even though Panarella, a sophomore, was only on the 2018 varsity roster for about half the season, she was still able to pick up on Hernandez’s change that proved to be exactly what they needed in winning this particular championship.

“She was a hard coach [last year], but this year she was a really hard coach because nobody wanted what happened last year to happen again,” Panarella said. “I think it prepared us a lot. Everyone was ready.

“As much as Davina’s a friend, coaches are gonna be tough, and she helped everybody get ready for the season. We were ready for this from the start. We knew we were gonna make it to the championship.”