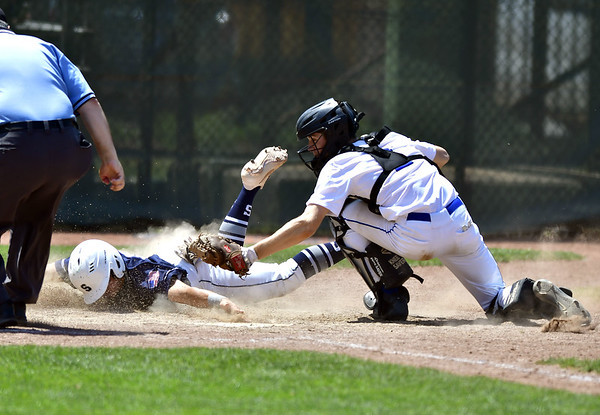 MIDDLETOWN – The Southington baseball team had its chance to jump on the seemingly untouchable Chad Knight of No. 6 Staples early in Saturday’s Class LL state championship. A pair of singles to lead off the bottom of the first provided the feeling that this game would be much different for Knight, who had shut down the defending champs in Cheshire in the semifinals in the form of a complete game shutout.

Instead, the Duke commit and Yankees draft pick settled in to retire three in a row and cruise to another dominant performance, handing the No. 3 Blue Knights a 3-0 defeat while allowing just three hits.

After singles in the first by Jack Meade and Jake DelMonte, Knight allowed just one hit the rest of the way, going seven innings and striking out 10 in the championship-clinching effort, one that moved Southington to 0-4 in its last four state final appearances.

“We could have got something going early on,” junior Andrew Paradis said. “But you can’t come through every time.”

Both starts for Knight over a five-day span went for seven innings, no runs, three hits and 10 strikeouts.

“He was really good, especially on three days rest,” head coach Charlie Lembo said. “We knew he was going to be good. We needed to have some better at-bats and limit the mistakes.”

Southington starter Ryan Henderson encountered a jam of his own in the top of the second, walking two straight batters with one out before retiring the next two. Henderson forced Jake Damico to fly out to center to end the threat with Knight lingering on deck.

Trouble brewed again for Henderson in the top of the fourth, when a leadoff single up the middle by Harry Azadian put Andrew Moy in a sacrificial state of mind. Moy dropped a bunt down the third base line, which was met by a charging Devan Bade, who fired a throw to first that sailed into the base line. Neuman reached out and made the catch at first before colliding with Moy, who met Neuman at the bag and jarred the ball loose, knocking Neuman’s glove from his hand and putting runners at the corners with nobody out. A walk to Adam Petro loaded the bases before Kevin Rabacs lifted a sacrifice fly to center to push across the first run of the game.

The rally continued when the Wreckers reloaded the bases for Knight, but Henderson escaped by forcing Knight to ground out to third. After loading the bases with nobody out before loading them again for one of the best hitters in the state, escaping with just one run surrendered seemed like a big win for Henderson and the Blue Knights.

Staples continued to apply pressure in the fifth, using a single, a stolen base and a groundout to put Zach Zobel on third base with two outs. Jason Krar came in to relieve Henderson, but promptly threw an errant pickoff attempt past Bade, allowing Zobel to score and put the Wreckers ahead 2-0, which felt like a comfortable cushion for Knight.

“We just made too many mistakes,” Lembo said. “That’s what it comes down to.”

Knight would receive more run support in the sixth. A leadoff walk to Rabacs set up a successful sacrifice bunt by Chris Veneruso. Rabacs advanced to third on a groundout and scored on a passed ball to put Staples ahead 3-0.

The Blue Knights put on a pair of leadoff runners in the seventh after Knight walked Neuman and Jake Romano, but Knight escaped the jam unscathed to record his second three-hit shutout in as many outings.

“It’s tough any time you don’t score with runners in scoring position,” Lembo said. “But we battled. We battled all game.”