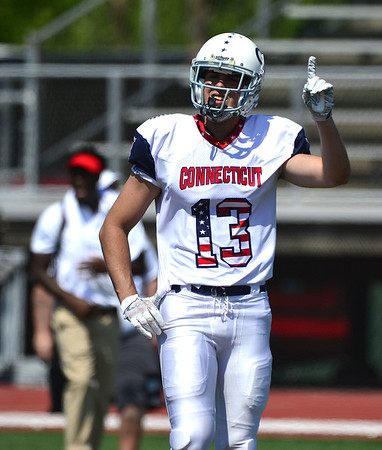 SOUTHINGTON - Tim O‚ÄôShea believed he needed a change and now, he couldn‚Äôt be more excited for the opportunity.

The former Southington High receiver will once again be playing football in his home state. O‚ÄôShea announced on Twitter Sunday night he was transferring from Wagner College, a school that competes against CCSU in the NEC, to UConn, where he will be playing tight end.

‚ÄúI‚Äôm real excited,‚Äù O‚ÄôShea told the Herald on Monday. ‚ÄúIt‚Äôs funny, I always told my dad when I was growing up I wanted to be on the sideline like the guys I was watching on TV and here I am. But it was a big decision and it was close to home, so that was one of the reasons. It wasn‚Äôt anything to do with the football program at Wagner, it had more to do with the academics and what I want to major in.‚Äù

An All-CCC selection for the Blue Knights in 2017, O‚ÄôShea led Southington in catches (49), yards (609) and touchdowns (8) that year and later signed his letter of intent with the Seahawks last February. But the sophomore did not appear in a game last season during his transition from receiver to tight end.

When O‚ÄôShea decided to enter the transfer portal in December, he reached out to his high school coach Mike Drury, who let him know what some of the situations were regarding the collegiate football teams in the state. Drury also happened to mention the Huskies were in need of some tight ends after losing Aaron McLean, Tyler Davis and Zordan Holman. The only other tight end listed on UConn‚Äôs spring roster was another former Southington standout in Jay Rose. The two had been teammates on the Blue Knights when Rose was a senior and O‚ÄôShea a sophomore.

After weighing his options, O‚ÄôShea narrowed his choice down to two finalists: UConn and Southern Connecticut State.

‚ÄúSouthern Connecticut has a nice campus, great coaches and even though it‚Äôs Division II, has a great program,‚Äù O‚ÄôShea said. ‚ÄúI reached out to UConn in late February, early March and it came down to those two. One thing I learned at Wagner, is football is football and it‚Äôs kind of the same everywhere. I was kind of looking more at academics because I made a decision out of high school just for football and I didn‚Äôt want to do that again. Wagner gave me the experience I needed. Now, I‚Äôm ready to take on the challenges of UConn and playing in the American Athletic Conference.‚Äù

After O‚ÄôShea reached out to UConn about playing in Storrs, the tight end said, one of the program‚Äôs recruiting coordinators followed him on Twitter. It led to O‚ÄôShea reaching out again and a meeting with UConn tight ends coach Corey Edsall and Rose followed, in which they talked football and broke down film of the Huskies‚Äô tight end play from last year.

‚ÄúYou could tell [Edsall] was trying to pick my brain a little bit,‚Äù O‚ÄôShea said. ‚ÄúI was pretty scared, to be honest, going like, ‚Äòplease don‚Äôt mess that up, please don‚Äôt mess that up.‚Äô He was asking me what the tight end did right, what the tight end did wrong. I guess I did really well in that. I know guys are faster than me and stronger than me, but I think one of the strongest aspects of my game is the mental side and being able to understand different techniques and leverages and things like that.‚Äù

O‚ÄôShea certainly has the size to compete at the FBS level now. He left Southington at 6-foot-4 and 190 pounds, before bulking up to 205 his freshman year. Now, he‚Äôs up to 230 and studying tape on some of the NFL‚Äôs elite tight ends from former Patriot Rob Gronkowksi to the Chiefs‚Äô Jason Kelce to the 49ers‚Äô George Kittle. Adding it to his game is something O‚ÄôShea is always looking to do.

And when he let Edsall know he was coming to UConn, O‚ÄôShea said, his new position coach was ‚Äúfired up.‚Äù His parents, Theresa and Tim II, were just as thrilled. O‚ÄôShea‚Äôs mother is a UConn alum, while the younger O‚ÄôShea said his dad cried a little thinking back to the tailgates the two had gone to years earlier.

‚ÄúI must be the luckiest kid in the world,‚Äù O‚ÄôShea said. ‚ÄúI have parents who are so supportive. I don‚Äôt have any brothers or sisters, so they‚Äôve been great in supporting me in what I want to do. They keep telling me to move forward and keep looking forward. I‚Äôm the only one in my family playing any kind of collegiate sport and my aunts, uncles and cousins have all been really supportive. My grandfather is really excited because he can finally come see games because I‚Äôm closer to home. He‚Äôs really one of my biggest supporters and a big inspiration to me.‚Äù

Now, O‚ÄôShea is looking forward to giving both his family and UConn something to cheer about.

‚ÄúMy time here at Wagner has been awesome,‚Äù O‚ÄôShea said. ‚ÄúI learned a lot about myself and my faith and I‚Äôm excited to take on this new challenge at UConn. I‚Äôm really grateful for this opportunity. It doesn‚Äôt matter if it‚Äôs with the offense, special teams or scout team. I just want to help the team win.‚Äù