Southington Public Schools back in session

Dean Wright | Staff Students set off the bus for another year of school. Buy this photo 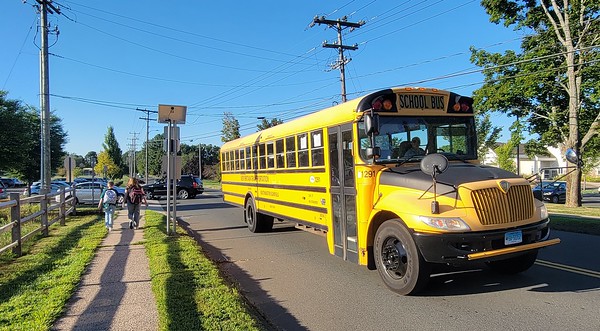 Dean Wright | Staff Buses roll after students cross the road on their way to the first day of school. Buy this photo

SOUTHINGTON – Southington Public Schools district is in session for another year.

Parents, students, buses and educators all crowded outside DePaolo Middle School Thursday morning for a bustling but orderly transition back to academic life. Students crossed roads and dashed across sidewalks to reunite with friends and school books. In all appearances, it was another normal first day of school.

“The big change is this is our first ‘return to normal’ year,” said Principal Chris Palmieri. “It truly feels like a normal opening (compared with) the last few years. We’re all excited. This is what it’s all about when the kids get back. We’ve been preparing all summer.”

Instructionally, the middle school has added some “intervention” time for students, continued the principal, in order to provide support for students needing extra help or as enrichment opportunities.

“I’m excited for them,” said mother, Nicole Tassis. “My stomach is in a twist right now.”

Her older and younger daughter both started high school and middle school respectively this season.

“So we’ve been through middle school already,” said Tassis of her family. “It was a great experience, in spite of covid. The first eight or nine months were fine then it hit. We’re hoping this round will be better.”

Wife and husband duo Michele Colwell and Alan Colwell said their youngest would be starting sixth grade and their oldest child would be entering high school.

“Our older one was part of the covid class, we call it, so her middle school years were a bit different than I think this one will be, but they’re both excited and we’re excited to see them start in new schools,” said Michele. “We’ve been thrilled with Southington Public Schools.”

Alan added he was enthusiastic about the return of “predictable schedules.” It was a good summer, he said, but it’s bittersweet because the return of school makes for a longer day without his children.

“Afternoon, when they get home, they have a ritual where they come into my office and they sit down,” said Tassis. “They blab about their day for 10 or 15 minutes and decompress before doing homework. That’s our thing. I take a break and listen to their day.”

Michele said the family aims to get downstairs in the morning for “some semblance of a breakfast,” whether it’s wanted or not, and to make sure all needed items are prepared for the day.

“I think the first couple of days, they’re all up, bright eyed and bushy tailed and ready to go. It only gets harder and harder as the school year goes on,” said Alan. “Then it’s sleeping through alarms.”

Tassis said children are often up and ready for school, but as soon as the coming Tuesday rolls in, the struggle to wake up on time for class will ensue.

“This morning, they were both immediately up and ready and had time to spare,” she continued. “I was like, if only every morning could be like this morning. I know it won’t be, but it’s okay.”