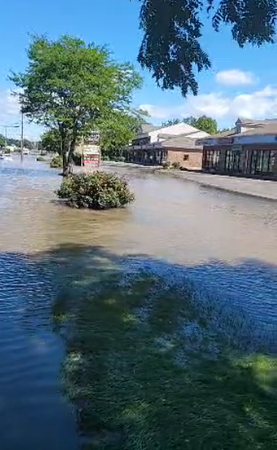 While there are no estimates for total damage as of yet, fortunately no injuries have been reported in Plymouth, Southington or Plainville, according to town leaders.

In Plymouth, Mayor David Merchant said that cleanup was “going well” as of Friday morning. The town, he said, ultimately came through Hurricane Ida “in pretty good shape.”

“It was no worse than any other bad storm,” he said. “We had a few low-lying areas where roads were washed out, but it wasn’t a lot. There were a few people who couldn’t get out of their driveways as well, but there were no evacuations and we had no issues with our water pollution control building. We had maybe one or two people lose power, but it was nothing widespread.”

Merchant said that Tony Orsini, emergency management director, kept him updated throughout the storm and its cleanup.

“Public works was out there yesterday and got everything cleaned up and back to normal,” said Merchant.

Plainville Town Manager Robert Lee said Thursday that the storm had a “major impact” on the town, with 30 people evacuated by boat along Forestville Ave. 18 of them were then put up temporarily in the Fairfield Inn. Lee had also reported that several roads were flooded including parts of Redstone Hill Road, East Street, Johnson Ave. and Shuttle Meadow Road.

“As of today, we still have a couple people at Fairfield Inn and we’re checking in with them on what their plans are,” Lee said on Friday. “Our roads are back open and our Water Pollution Control Facility is back up and running.”

On Thursday, Lee said that several pump stations had been unable to keep up with the flooding coming through, resulting in sewage coming into the basements of some seven or eight homes located nearby.

Southington Town Manager said that as of Wednesday night and into Thursday morning, 10 roads had closed and the town had received 35 phone calls about flooded basements and cars trapped in flooded roads. Flooding occurred in downtown Plantsville, Curtiss Street, Lazy Lane, S. Main Street and part of Queen Street. By mid-day Thursday, as the waters began to recede, five of those roads were back open.

“All of the roads have re-opened now except on Curtiss Street by Art Rich photography,” said Sciota on Friday. “Before we re-opened any roads, we made sure that they were in good condition and that there was no debris on them. This was done yesterday and early this morning.”

Sciota said that he is hopeful that Curtiss Street will re-open by later in the day Friday or Saturday.

As of Friday, Sciota said there were still some low-lying basements with water in them and the dog park remained flooded. However, there were no power issues in town and the town’s waste water treatment pumps kept working.