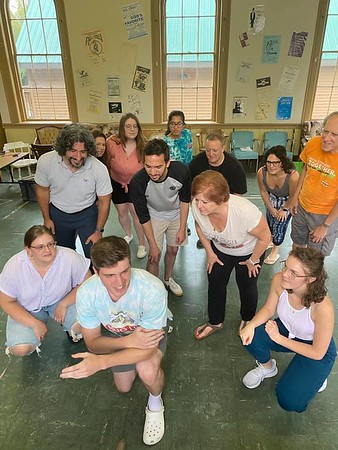 The musical is based on the Gospel of Matthew which tells the story of how the teachings of Jesus Christ led to the building of a community. It will be shown at 7:30 p.m. at the gymnasium of the Wheeler Regional Family YMCA at 149 Farmington Ave. The production features 15 adult performers as well as 8 children, ranging in age from 5 to 15.

ŌĆ£This is the first time we have been able to put on a play since 2019,ŌĆØ said Perlini. ŌĆ£The cast has been rehearsing three or four times a week since July and the excitement is palpable. We have an amazing cast with an amazing energy and spirit; itŌĆÖs going to be an awesome show.ŌĆØ

Perlini thanked Amanda Savio, president of Southington Community Theatre, for working to keep the group engaged with the community during the pandemic.

Perlini said that she believes that people will enjoy the TheatreŌĆÖs production of Godspell.

ŌĆ£The music will be familiar to a lot of people, since the musical was adapted into a film,ŌĆØ said Perlini. ŌĆ£People are also familiar with the Bible and the Parables of Jesus. Godspell is like a 1970s version of the story of Jesus and his disciples. While the characters of Jesus and Judas remain the same, the people in the cast play themselves.ŌĆØ

Perlini said that different productions of Godspell often put their own twist on the play, with a more famous example incorporating the events of 9/11. Perlini said that the Southington Community Theatre production will be focused on the idea of unity and bringing people together.

ŌĆ£ItŌĆÖs about identifying with something bigger than just ourselves,ŌĆØ she said.

Tickets are $12 in advance or $15 at the door. They can be purchased by visiting southingtoncommunitytheatre.org, stopping in to the Wheeler Regional Family YMCA., Plainville or The Music Shop at 405 Queen St., Southington or Just For You Gift Shoppe at 979 Meriden-Waterbury Turnpike, Plantsville.