Southington fifth grader chosen as next Kid Governor: 'If you give me an opportunity to help others, I'm totally in for it' 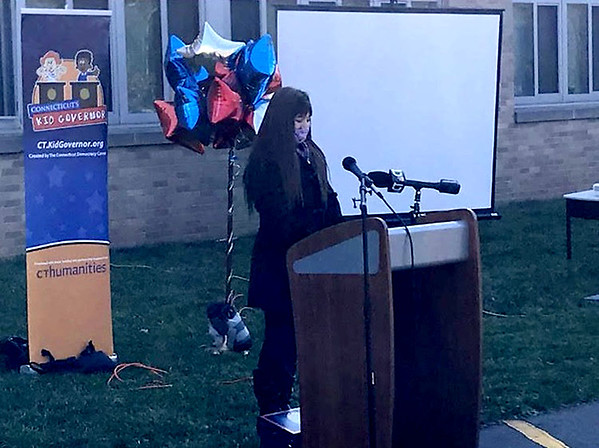 Brian Johnson Staff Reese Naughton, a fifth grader from Zaya Oshana Elementary School, stands with her parents as Superintendent of Schools Tim Connellan congratulates her on being named Kid Governor. Buy this photo

This was the sixth year that the Kid Governor contest was held. Naughton will be “inaugurated” in January and will speak publically to advocate on behalf of her platform. She will be joined by a “cabinet” of six other finalists from throughout the state who will advise her on a variety of other issues. Some 6,000 students statewide registered to vote for this contest.

Naughton thanked all that supported her throughout her campaign when she took the podium at an assembly held behind her school.

“The way we are living has changed so much since earlier this year,” said Naughton. “We’re wearing masks at school and at recess. We’re hearing about all of the sick people in the hospitals. These changes have affected people’s mental health. It’s easy to feel isolated and depressed. My goal is to fight that negativity and spread positivity. Our school situation can change any day but I’m confident that we’ll find a way to work together and connect with each other.”

Naughton said that she was “really excited” when she learned that she had “achieved something so great.”

“I have always wanted to help others,” she said. “I’ve participated in many fundraisers before this. If you give me an opportunity to help others, I’m totally in for it.”

Naughton’s parents, Patrick and Ally Naughton, her teacher Sandy Chavez, her principal, Josephine Rogala, Superintendent of Schools Tim Connellan and Brian Cofrancesco of the CT Democracy Center, who heads the Kid Governor program, were also at the school to congratulate her. She was also congratulated by Secretary of State Denise Merrill virtually.

Ally Naughton hugged her daughter and said “You did it!” when the announcement was made.

“We’re incredibly proud of her,” she said. “I was in awe; I knew that she could do it but she had some tough competition from the other finalists.”

Chavez said that there were tears in her eyes when her student won the Kid Governor contest. She said that the contest was a great way for fifth graders to learn about branches of government and the election process.

“She has passion and confidence,” she said. “She is a born leader. She is a young lady who knows what she wants and how to achieve her goals but I know that she also knows how to listen, be compassionate and take input from others. These are the cornerstones of a great leader.”

Rogola said that Naughton being named Kid Governor was an “amazing accomplishment.”

“I know you will use your voice to bring awareness to and support causes that are close to your heart,” she said. “I know that you are well prepared, I wish you well and I look forward to supporting you.”

Connellan congratulated Naughton on behalf of the entire school district and the Board of Education.

“This contest is an absolutely wonderful exercise in democracy,” he said. “I know you will do a fantastic job and we all appreciate your efforts.”

Merrill, who was the one to announce that Naughton had won, said that she “identified important issues” and “created a meaningful platform.” She applauded the students who took the time to vote for the contest and encouraged them to register to vote when they turned 18.

Cofrancesco said that the Kid Governor program is a way of helping students understand the value of civics and getting them excited about voting. He said that Naughton’s platform was “excellent’ and “really resonated with kids this year.”